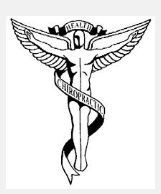 William Borrmann, Doctor of Chiropractic, passed away at his home on Sunday evening, August 11, 2013, at the age of 86. Doctor B. was born in Milwaukee on March 19, 1927, son of the late Richard and Hedwig (Lins) Borrmann. Bill attended high school and Chiropractic school, and practiced in his field for sixty years. He was a member of the Wisconsin Chiropractic Association and was an original diplomat of the International College of Applied Kinesiology. When time permitted, he loved to hunt, fish, and enjoyed sports of all kinds. Toward the end of World War II, he served in the United States Navy, and on August 2, 1947 married the former Beverly Coulson and celebrated sixty-six years of marriage just last week. Together the couple was blessed with six children: Marvin (Nancy) Taylor of Sturgeon Bay, Maria Taylor of Appleton and their daughters Anna and Alicia (Chad); Dannie (Josephine) Taylor of South Beloit, Illinois and their daughters Connie and Dawn (Bob); Blair (Leah) Borrmann of Indianapolis and their daughter Mara; Bari (Craig) Mader of Farmington, Minnesota and their sons Caleb and Spencer; Bonnie Borrmann of Pine River and her children Conrad, Emily, and Jason; and Barbra (Robert) Frahm of Appleton and their children Andrew, Austin, and Abigale; there are also eight great-grandchildren; and a sister: Eleanor Skogland of Colorado. Bill was preceded in death by his parents, a sister Ann Russell, and brothers-in-law Lars Skogland and Joe Russell.

A memorial service to celebrate Bill's life will be held at 11:00 AM on Saturday, August 17, 2013 at CHRIST THE ROCK COMMUNITY CHURCH, W6254 U.S. Highway 10 in Menasha. Pastors John Kieffer, Peter Leschke, and Bidal Torrez will officiate and lead the worship service, and military honors will follow. Inurnment will take place at a later date at Greenlawn Memorial Park. The family will receive relatives and friends at the church on Saturday from 9:00 AM until the time of the service.

Doctor B. was a humble man who always did for others before himself. He was devoted to his wife, his family, his country, and his work. He was one of the kindest, most gentle-hearted men, yet still so strong in all he did. He was a dedicated caregiver for many decades and leaves behind many who will fondly remember his compassion. He will be missed by all who knew and loved him.