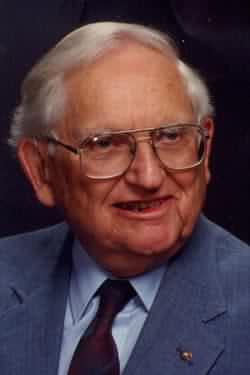 Age 85, died on September 4, 2002 at home. Win was born June 23, 1917 in Mosling, Oconto County, Wisconsin, son of Archibald and Hildegarde (Brauer) Schumaker. He attended the elementary school in Mosling, and graduated from Shawano High School in 1934. He attended the Vocational School in Appleton and took several correspondence courses and received his C.P.A. Certificate in 1942. In 1941 he married Ruth Marie Iwen in Shawano. They celebrated their 61st wedding anniversary this year. Win was employed as an Accountant by Consolidated Badger Corporation in Shawano and Combined Locks Paper Company. Win also served as a special agent in the Federal Bureau of Investigation and as a Controller of the Institute of Paper Chemistry. In 1945 he opened his office as a Certified Public Accountant and had several partners until his retirement in 1982. He was a member of First United Methodist Church, the Appleton Rotary Club for over 50 years, the American Institute of Certified Public Accountants, and the Wisconsin Institute of Certified Public Accountants. He was very active in community affairs and received the Vocational Service and Paul Harris Award from Rotary and the Paul and Elaine Groth Mentoring award from the Mielke Family Foundation where he served as Director and Treasurer for 23 years. Win‚Äôs hobbies included travel, photography, golf, water skiing, fishing, music, bridge and reading.

A memorial service will be held at First United Methodist Church on Saturday, Sept. 7, 2002 at 11:00 a.m. with Rev. Kent Ingram officiating. The visitation will be from 9:30 a.m. until the time of the service.

In lieu of flowers, friends may make a donation to the First United Methodist Church or the Community Foundation for the Fox River Region, or the American Cancer Society.