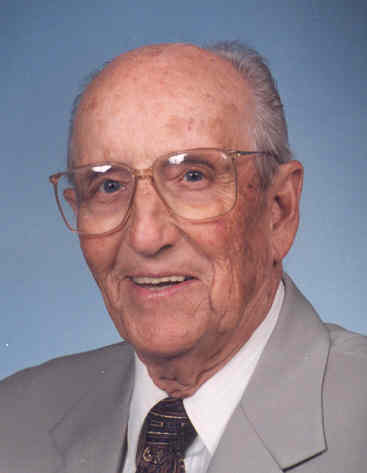 In His grace and mercy, the Lord called the soul of His servant, Wilmer ‚ÄúBud‚Äù Stach, age 88, Home on May 14, 2003 after a long illness. He was the devoted husband and dearest friend of Dorothy ‚ÄúPeriod‚Äù Stach (nee Below) for 63 years. He was born on August 16, 1914 to the late Hubert A. and Elsie (Kamm) Stach in Appleton. He was a graduate of Appleton High School, and attended Northwestern University School of Management in 1970. He married Dorothy on September 2, 1939. He served with the U.S. Army during World War II from 1943 ‚Äì 1946 and was awarded the European African Middle Eastern Bronze Battle Star. Bud was an employee of Aid Association for Lutherans (AAL) from 1932 through 1979. At the time of his retirement he was Vice President and Treasurer of the organization. He served on the building committee of AAL‚Äôs corporate headquarters. He was active in many civic, business and professional organizations. He was President of the Wisconsin Fraternal Congress, a member and past director of the Wisconsin Insurance Club and President of the Canadian Fraternal Association. He was a director of Valley Bank and Appleton Memorial Hospital, and served as the first elected President of the AAL Employee Credit Union. He was a member of Governor Knowles‚Äô appointed task force on computer services for the state of Wisconsin. He was a member and past president of AAL Branch 1 at St. Paul Lutheran Church, Appleton. He was also a counsel to the City of Appleton Police Facilities Committee. Bud also served as Treasurer of Lawrence University‚Äôs Viking Bench. Bud was a long time member and past president of Riverview Country Club. He was past president of the Appleton Noon Lions Club and was active in the YMCA and United Community Services; held offices and served on committees of the Appleton Area Chamber of Commerce, the Appleton Junior Chamber of Commerce, MacDowell Male Chorus and the American Legion. Bud was a lifetime member of St. Paul Lutheran Church in Appleton. He was trustee and financial secretary for many years, served on various committees and sang in the church choir for over 50 years. He served on the insurance committee for Fox Valley Lutheran High School. Bud participated in various musical ventures including barbershop quartets, Riverview Country Club‚Äôs Harvest Home productions, plays and choral presentations. He bowled with the best and was a member of Behnke‚Äôs clothing team that competed in State and Midwestern tournaments. He was an avid golfer and enjoyed woodworking, lapidary, needlepoint and latchhook. He completed rugs and wall hangings along with jewelry items for his children and grandchildren. Bud and his wife traveled extensively across the United States and abroad, and spent the past 25 years wintering in Arizona with many of their friends.

He is deeply loved by his survivors who include his wife, Dorothy, his daughter Pam, Waunakee, Wisconsin; his son Rick, (daughter-in-law, Joanie) Appleton and his son David, (daughter-in-law, Patricia) Centreville, Virginia; a nephew Tom Gresenz, Green Bay; and a niece Sandy Engebose, Green Bay.

He was preceded in death by his mother and father, his sister, Peg Gresenz, Green Bay and his nephew, Gary Gresenz, Appleton. He was a loving grandfather to Lindsay and Whitney Stach of Appleton and Liesl, Dieter and Paetr Stach of Centreville, Virginia. His life was filled with numerous life-long friends, many of whom preceded him in death.

Funeral services for Wilmer will be held at 11:00 a.m. Tuesday, May 20, 2003 at St. Paul Evangelical Lutheran Church, 302 N. Morrison St., Appleton, Wisconsin, with the Reverend Ralph C. Waack officiating. Entombment will be at Appleton Highland Memorial Park. Friends may call at the Wichmann Funeral Home from 5:00 p.m. ‚Äì 8:00 p.m. Monday, May 19, and on Tuesday from 10:00 a.m. until the time of the service. In lieu of flowers, a memorial fund is being established in his name.

Special thanks are extended to the staff, nurses and CNAs at Cherry Meadows Hospice, Home Instead, and the doctors and nurses at Appleton Medical Center for their loving care.

‚ÄúBe thou faithful unto death, and I will give you a Crown of Life.‚Äù Revelations 2:10.