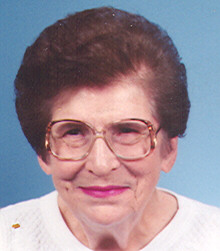 Wilma M. Tornow, age 87, of Appleton, died Monday morning. February 5, 2007, at Theda Clark Regional Medical Center. She was born September 20, 1919, in Norrie, Marathon County, WI, to the late William and Lydia (Kruse) Tornow, who farmed in Marathon County. Wilma was educated in Wisconsin public and parochial schools. She graduated from Weyauwega High School in 1936. Most of her younger working years were spent in the family tavern and restaurant business, both in the Weyauwega area and in Appleton. In 1942 and during the war years, she worked as a machine operator at the Allis ‚Äì Chalmers Manufacturing Company, in West Allis, WI. While at Allis ‚Äì Chalmers she was selected by management, from several thousand women employees, as the female machine operator to be interviewed by Nancy Gray of WTMJ radio on her very popular show, ‚ÄúWhat‚Äôs New, Ask Nancy Gray‚Äù. In 1947, Wilma returned to Appleton and became a permanent part of what was then known as ‚ÄúTornow‚Äôs Frozen Custard‚Äù. She worked in that capacity until 1966, when the Tornow family made the decision to discontinue the entire business enterprise dba ‚ÄúTornow‚Äôs Food Market‚Äù. Wilma, her sister, Norma and brother, Jul then moved to Honolulu, Hawaii, where she and Norma resided for the next 39 years. After several years of simply enjoying Hawaii and then caring for Jul, who had been critically injured in an auto accident in 1968, Wilma was employed as their Director of Human Resources by Holiday Inn, Waikiki Beach, a 620 room luxury hotel. She was later to become the supervisor of Human Resources for all Holiday Inn Hawaii properties. That position was subsequently followed by stints at the Prince Kuhio and Island Colony Hotels. Wilma retired in 1983 and continued to enjoy life in Hawaii until her return to the Mainland in 2005, where she dubbed herself and her sister, Norma, as ‚ÄúRepatriated Hawaiians‚Äù. Wilma is survived by her sister, Norma, Neenah; her sister-in-law, Kathleen Tornow, Appleton; and seven nieces and nephews. She was preceded in death by three brothers, Julius F., Wilbert M. and Norman R. Tornow, her sister Gertrude (Roy) Sager and her nephew Ronald Sager. Funeral services for Wilma will be held at 7:00 pm, Friday, February 9, 2007 at the funeral home, with Reverend Martin Ruge officiating. Burial will be in Appleton Highland Memorial Park. Friends may call at the funeral home from 4 pm, Friday, until the time of the service. A memorial fund is being established.