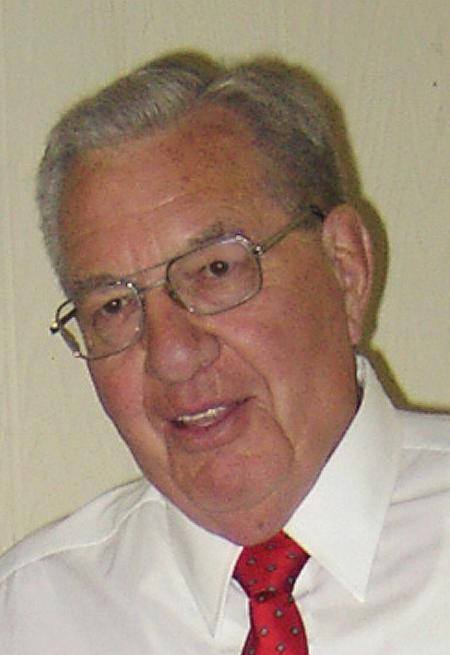 William Joseph Steichen, Appleton, age 75, died Monday July 31, 2006, at
St. Elizabeth Hospital surrounded by his loving family after surviving 12 years of prostate cancer. Bill was born March 25, 1931, to the late Nicholas and Margaret (Kirkpatrick) Steichen in Dubuque, Iowa. He married the former Mary Ann Kilsdonk of Kimberly on May 21, 1955. They were blessed with 6 children and 6 grandchildren. Bill retired from Kimberly Clark, Lakeview Mill in 1989 after more than 30 years. He was a long-time member of Sacred Heart Parish in Appleton. Bill enjoyed travel, wintering in Gulf Shores, AL and camping at Crystal Lake each summer. He made friends wherever he went. Children were drawn to him, and he loved them in return. He is survived by his wife, Mary Ann; his six children and six grandchildren: Katherine (Mike) Rosing and sons Joshua and Samuel, Madison; Ellen (Richard) Blodgett and son Allen, Appleton; Mary Steichen, Appleton; Mark (Mary) Steichen, and his son Alexander, Madison; Patti (Kevin) Knoche and daughters Carly and Kaitlin, Madison; and Sara Steichen, Neenah.
He is also survived by his brothers Bob (Loretta) Steichen and Ray (Pat) Steichen, Dubuque; sisters Rita Steichen, East Dubuque; MaryLou (and special friend Dick), Dubuque and JoAnn (Mike) Malek, Madison; sisters-in-law Juanita Steichen, East Dubuque and Judy Steichen, Dubuque; his wife‚Äôs sister, Germaine (John) Verage, Long View, WA; his wife‚Äôs brother Con (Pat) Kilsdonk, Crivitz; sisters-in-law Delores Kilsdonk, Darboy and Florence Doverspike, Antigo; a dear cousin-in-law Joy Schmidt-Parizek (Paul); and many nieces and nephews.
He was preceded in death by his brothers, Glen and Jack; sisters, Mary Steichen and Rosemary Severson; half-brother Kenneth ‚ÄúBud‚Äù Thorn; brother-in-law Milt Severson; father-in-law Henry Kilsdonk and mother-in-law Minnie Kilsdonk Kemps; his stepfather-in-law Ted Kemps; his wife‚Äôs brothers Jim and Bob, and sister Patti Mae; godchild and niece Jeannie Stoeger and nephew Tom Kilsdonk. The funeral liturgy for William will be held at 11:00 am, Thursday, August 3, 2006, at SACRED HEART CATHOLIC CHURCH, 222 East Fremont Street, with Father Robert Karuhn officiating. Burial will be in Holy Name Cemetery, Kimberly. Friends may call at the funeral home on Wednesday, Aug. 2, 2006 from 5 ‚Äì 8 pm and on Thursday at the church, in the Sacred Heart Room, from 10 am until the time of the mass. A prayer service will be held at 7 pm. In lieu of flowers, a memorial is being established.

His family would like to thank the 4 South nurses and staff at St. Elizabeth‚Äôs Hospital for their wonderful care of Bill. We would also like to thank Dr. Dirk Fisher, Dr. Barbara Lauderdale and Dr. Bradley Lauderdale with special thanks to Dr. Timothy Goggins and Dr. Brian Avery for their excellent care and concern. Also many thanks to the staff of Affinity Home Health Services, Father Bob Karuhn of Sacred Heart, the Pastoral Ministry, Chaplin Tom Oie and all those who have kept Bill in their prayers.