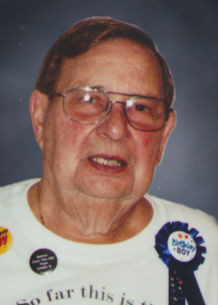 Bill Guyon, age 85 of Appleton, passed away peacefully to be with his Lord on June 11, 2019, due to complications from Atheroembolic Disease. Bill was born in DePere, Wisconsin, on August 20, 1933, son of the late Delor and Eloise (Geurts) Guyon. Bill served two years in the Army Veterinary Corps, then received his degree from the University of Wisconsin - Whitewater, and for many years was an ownership partner with his parents at George’s Steakhouse in Appleton. Bill later went back to school and received an advanced degree from Thunderbird University in Arizona. Armed with new knowledge, he took a position at Miller Electric in International Sales, and had the opportunity to travel to sixty-seven countries. During his time at Miller, he met the love of his life, Ann, at a musical performance at the Lawrence University Chapel. They married in 1975 and spent forty-four wonderful years together. When Bill left Miller, he and Ann opened Guyon’s Rib House in Little Chute, and operated it for several years. He then worked as a lobbyist in Madison, representing the Small Business Administration, and finished his career at Valley Packaging. There he developed a wonderful rapport with the staff and clients. For a time, he drove the team bus and coached a Special Olympics basketball team. Everyone at Valley Packaging loved Bill. He will also be remembered as a lifelong Green Bay Packer fan and for his good sense of humor.

He was preceded in death by his parents, a sister Ann Kafka, and a brother Guy Guyon.

The funeral liturgy for Bill will be held at 11:00 AM on Monday, June 17, 2019 at St. Bernard Catholic Church, located at 1617 W. Pine Street in Appleton, with Fr. David Funk, OFM Cap. officiating. Full military honors will follow. Interment will take place at Riverside Cemetery. Relatives and friends are invited to gather at the Wichmann Funeral Home, located at 537 N. Superior Street in Appleton, on Sunday from 2:00 PM until 4:00 PM and on Monday at the church from 10:00 AM until the time of the service.

Memorials may be directed to either Special Olympics or the Humane Society.