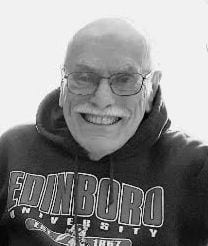 On February 25, 2020, William Sense was called home to his Lord and Savior, Jesus Christ. This was after a very peaceful night spent with his family and pastor in his own bed at home.

Bill was born on August 6, 1938, in Marquette, Michigan, to Mildred (Guerin) and William Sense. Bill and his family moved from Marquette to Appleton when he was in 3rd grade. He lived in the area the rest of his life. While in high school he enjoyed playing trombone in the band which is where he met his future best friend and spouse. He graduated from Appleton High School in 1956 and attended the University of Chicago and earned his M.A. from UW-Oshkosh in 1972. He married his high school sweetheart, Jean (Tank) Sense on June 11, 1960, and they would have celebrated their 60th anniversary this year. Bill was also a United States Army Reservist in his younger days.

Bill was a wonderful, dedicated, loving father and will be deeply missed by his children, Debbie and Jeff McMullen and Rick and Dorene Sense.

Throughout his life, Bill was a teacher in various positions in the Menasha School District, as well as being a dedicated Sunday School teacher most of his adult life. He also worked at AAL for 20 years before retiring and starting a business with his wife, Jean.

He enjoyed photography, travel (especially by train), reading, and most of all spending time with his children, grandchildren (Kegan and Andria McMullen, Mikaela McMullen, and Ryan and Greg Sense) and great-grandson, Kedan McMullen.

Bill was preceded in death by his parents, his in-laws (Fred and Arlene Tank), his two sisters and their husbands, Donna (Les Robinson) of Valparaiso, Indiana, Janice (Robert) Boehmig of Atlanta, Georgia, and his granddaughter, Meghan McMullen.

The family would like to thank the hospice care providers and everyone at St. Paul Elder Services, especially the St. Paul transportation team for their loving, dignified and joyful treatment of Bill.

Funeral services for Bill will be held at 11:00 AM on Thursday, February 27, 2020 at Hope Lutheran Brethren Church, located at 415 E. Hoover Avenue in Appleton, with Rev. Jim Rademaker officiating. Entombment will follow at Highland Memorial Park. Family and friends are invited to gather at the church on Thursday morning from 9:00 AM until the time of the service.

“And we know that all things work together for good to those who love God, to those who are the called according to his purpose.” Roman 8:28 (NIV)