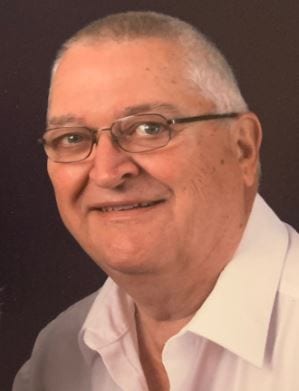 Bill, 77, peacefully entered into the Lord’s hands on Tuesday, September 15, 2020.  He was born on August 7, 1943, in Neenah, WI.  The only son of Leland and Bernice (Tadych) Neubauer, he was raised in Menasha his entire childhood.  Bill was successful playing basketball and baseball as a 1961 graduate of Menasha High School.  Bill furthered his education by achieving a degree in accounting from Spencerian Business College in Milwaukee.  After graduating he met his one and only true love, Barb, and was married on November 23, 1966, at Sacred Heart Parish in Sherwood.  Bill and Barb were married for nearly 53 years, before Barb’s passing in November 2019.

Bill worked varying accounting positions before starting with Appleton Papers-Lox Mill in 1972.  He eventually took on a larger accounting role in the company by moving to the Appleton Papers-Appleton Plant, finally retiring in 2004.  He was very passionate about cheering for the Cubs and Bears, but throughout his life his greatest passion was his family.  He always showed great care, generosity, and selflessness to those close to him.  Nothing brought him more joy than to see those around him were happy.  In his retired years, if a grandchild had a sporting event, play, concert, or significant life moment, Papa was there with his video camera.  His family is forever grateful he took the time to provide these everlasting memories.

The outpouring of support to our family from those that knew Bill well or those that knew him in passing have largely uplifted our spirits during this time.  Although we would love to celebrate Bill’s life with each of you in person, it warms our hearts to know he had such an impact on those that he met.  Whether he was a neighbor, coach, or friend, the Neubauer family would like to express our sincere gratitude and appreciation for all the support and prayers received.

A special thank you is sent to the nurses and staff of Ascension St. Elizabeth for their compassion and care for Bill during the last 2 weeks.

Dad/Papa: We know how much you missed mom the last few months.  It comforts us to know you are once again together, joyfully watching our lives.  Your life was lived by setting a positive example for your children and grandchildren, and for that we are eternally grateful.  We will see you again, with your video camera all set to record it!