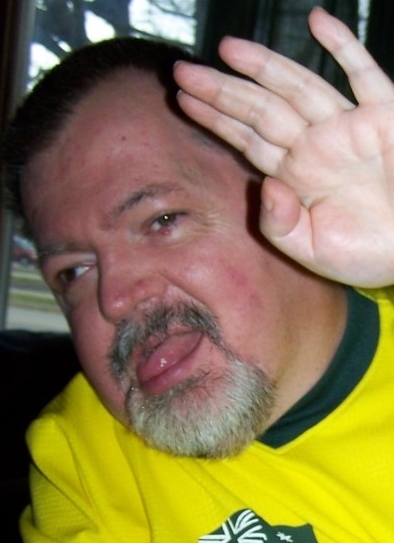 William B. Aldrich, 57, passed away peacefully surrounded by his loving family on March 1, 2017. He was born on November 14, 1959 to the late William and Donna (Bowens) Aldrich in Antigo, WI.

In 1962 at the age of 2 Bill was struck by a speeding car. He ended up with a Traumatic Brain Injury that left him in a coma for 8 months, a tracheotomy in his throat and little ability to move before he returned home. The doctors attempted to convince his mother and father to place him in a nursing home as the family felt his brain was so severely damaged he would not live long. He's now 57! The family turned to the Cerebral Palsy Organization (CP) for help and guidance to give him the best quality of life they could afford.

The following year convinced his mother and father they had made the right decision because Bill slowly showed signs of recognition and comprehension. He began to laugh and smile. The nerves had rerouted around the damage providing him the same cognition as any person throughout his development. What didn't reroute were the nerves to his motor skills. Bill was paralyzed on the right side. His lungs eventually began working on their own, but the right side has diminished capacity. As he aged his muscles atrophied and arthritis froze his joints from the inability to use them.

As a youth he was able to support his body standing within a table that allowed him to keep his balance and he had the strength to pull himself around in a crawl. He attended 12 years of schooling earning a high school diploma and worked 35 years at Lakeside Packaging Plus (LLP), the sheltered workshop in Neenah. At LLP Bill recycles paper with adaptive equipment separating plastic inserts from books and manuals, placing the plastic in one bin and paper in another. He also participated in social activities such as music groups, art activities, and is taken out of his chair for stretching on a mat. He enjoyed going to the YMCA where he drove his wheelchair around the track. He would often slow down to say hi to a passerby.

Bills father, William was a Master Sergeant in the United States Air Force. This gave Bill the opportunity to travel around the world while his father set up radio communication for the military. Bill has traveled on military transport planes, commercial airlines, boats and automobiles. While his dad worked, Bill and his mother were busy setting up CP centers and other resources for the disabled in locations where there were none.

Bill was born in Antigo, WI and has lived in Wisconsin for the last 46 years. He lived in the family home in Menasha until his increased needs required him to move to a group home for 24 hours staffing.

Bill enjoyed attending camp where he could go fishing, swimming, singing around the campfire, ride the pontoon boats and even did a zip line. He loved shopping and picking out t-shirts and movies from Walmart. He would go to the theater, dances, visits other group homes, go out to eat and his favorite activity is the Easter Seals Camp Wabeek near Wisconsin Dells which he attends every year.

He is preceded in death by his parents, William and Donna (Bowens) Aldrich, aunts and uncles; Nancy Stanke Jerome Bowens, Carole Bezotte and Gene Derfus.