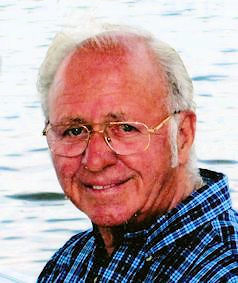 William Arthur Beschta, age 81, passed away peacefully on Thursday, July 5, 2012 at his home in the Town of Center, after his battle with Pulmonary Fibrosis. He was born on May 30, 1931 in Hortonville, the son of the late Arthur and Helen (Krause) Beschta. Bill married Carol Jean Reiland on July 28, 1953 at St. Edward Catholic Church in Mackville.
Bill was a crane operator from 1953 until buying a farm in 1961 and farmed with his family until 1988. He took great pride in his farm and cows. Bill then purchased his own crane and dug many ponds in the surrounding area.
Bill loved tractor pulling. He and his brother-in-law, Ron Reiland built their own eliminator and started the Mackville Tractor Pull 37 years ago. This year he missed his first pull, Bill was either pulling or a spectator.
He also enjoyed spending the winters in Florida, shuffle board and playing sheepshead and horseshoes, listening to polka music, and playing his accordion for all the little grandchildren. In his earlier years he liked rabbit and pheasant hunting with his sons and brothers-in-law.
A devoted husband and father, Bill now joins his son Tim in Heaven, and leaves his beloved wife of 59 years. He will forever be remembered and loved by his children and their spouses.
Bill is survived by his wife: Carol Jean “Jeannie” Beschta; children: Bonnie (Tom) Lemieux, Terry (Jo) Beschta, Tom (Diana) Beschta, Vickie (Dan) Van Den Bogart, Julie (Tim) Pitsch and Dawn (Dale) Barth; Roger (Jane) Reiland, who was like a son: his treasured grandchildren: Michelle, Chad, Riki, Chase, Kelly, Brittany, Dylan, Noah, TJ, Nicki, Ryan, Tyler, Cierra, Garrett and Cameron, and Chris Rottier; Jessica, Justin, Nicholas and Allison Reiland, who were like grandchildren; his cherished great grandchildren: Gavin, Teagan, Braden, Corbin, Benae, Alex, Amari, Paige and Max. And last, but not least, Grandpa's favorite four-legged friends, Val, Mitsy and Sammy, who came to visit him every day for their dog treats.
He is further survived by his brother: Art (Shirley) Beschta, Jr., and his sister: June (Harold) Strey, along with nieces, nephews, other relatives and friends. Bill was preceded in death by his sister, Eunice and Bill Petit.
The funeral liturgy for Bill will be held at 11:00 am on Saturday, July 7, 2012 at ST. EDWARD CATHOLIC CHURCH, Hwy 47 North in Mackville. Fr. Charles Brooks, Fr. Dan Felton and Deacon Jeff Hofacker will be officiating. Interment will be in the parish cemetery. A time of visitation will take place on Saturday from 8:30 am until the time of mass.