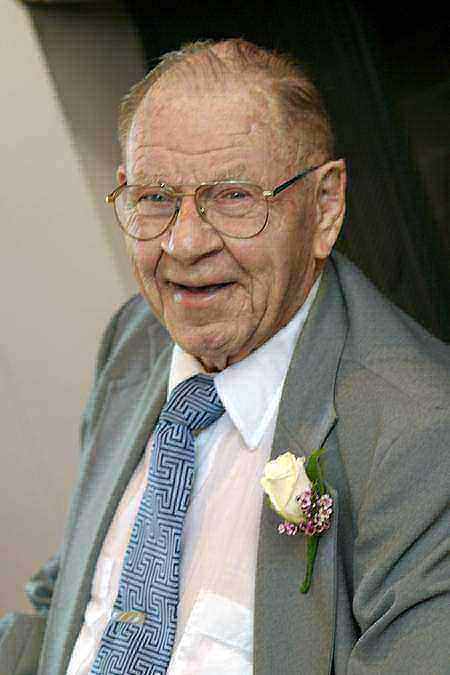 William Allen Dryer, 85, of Kimberly, WI, formerly of Park Falls, passed away Monday, July 12, 2010 at Appleton Medical Center, following a short illness. He was born March 27, 1925 in Appleton, WI, the son of Olin and Esther (Fish) Dryer. His early life and schooling were in Kaukauna, WI. After serving with the 96th Infantry Division in the Pacific during WWII where he was awarded the Bronze Star, he attended and graduated from UW Madison with a Master's Degree in Chemical Engineering. On Aug. 27, 1949, he married Florine Grandine. They moved to Park Falls where Bill worked for the Flambeau Paper Company for 37 years, at one time as Director of Research and Development. He was a member of Park Falls American Legion Post 182, Heisler-Mockler VFW Post 6903, and Disabled American Veterans. He was a long time member of the First Congregational United Church of Christ in Park Falls. After moving to Kimberly he and his wife joined Peace United Methodist Church in Kaukauna.
As a teen, Bill became an Eagle Scout, setting the high standards and moral character that would stay with him all through life. Undoubtedly the single thing that best defined him was his deep commitment and activity in Freemasonry. He had been a member of the Masonic Lodge for 63 years. He served 1 year as Worshipful Master, 18 years as Secretary, and 35 years as Treasurer of Park Falls Masonic Lodge #300. He was a State District Lecturer for 11 years. He was a member of Keystone Chapter of Royal Arch Masons, Council of Royal and Select Masters, Knight Templars, Scottish Rite, and Eastern Star. He was also a member of Zor Shrine and a founding member of Zor Shrine Flambeau Clowns, serving as both Secretary and Treasurer. As “Willie” the Clown, he spent many hours blowing balloon animals, marching in parades, and entertaining at community functions.
He enjoyed traveling, visiting family and friends, and opera – just listening or taking in a performance whenever he could. He will be remembered for his kindness, commitment to things he deemed important, honesty, and willingness to help whenever there was a need.

A Memorial Service for Bill will be held at 3:00 p.m. on Friday, July 16, 2010 at PEACE UNITED METHODIST CHURCH, 2300 Wisconsin Avenue, Kaukauna, with the Rev. Tim Albrecht officiating. Friends will be received at the church from 1:00 p.m. until the time of service. A Masonic and Eastern Star Service will be held at 2:30 p.m. The committal will take place at Highland Memorial Park at a later date.

In lieu of flowers, a memorial fund has been established in Bill‚Äôs name.