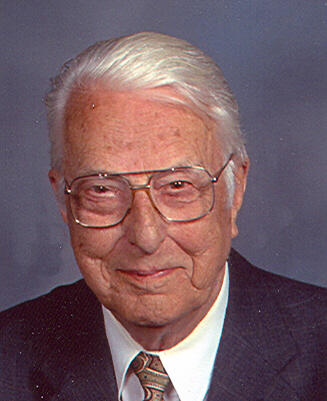 Willard “Bill Sheldon, 96, passed away peacefully on Thursday, April 14, 2011. Willard was born on July 28, 1914 in Sutherland, Iowa, the son of the late Zenas and Eleanor (Carmichael) Sheldon.

He graduated from Iowa State University with a degree in structural engineering. After attending a fraternity conference in New York State, he met and later married, Elizabeth “Betty” Norcross on June 30, 1937. They celebrated 63 years of marriage before Betty died in 2000. Bill served his country with the United States Navy.

Bill began his engineering career with Stanley Engineering Company in Muscatine, Iowa until moving to Appleton, Wisconsin to work for Meyer Construction in Neenah. He ended his career with Kimberly Clark and was instrumental in locating and vetting an architectural firm to design the Research and Development campus on Winchester Road. He was very proud of his Scottish Clan roots.

During his life Bill was active in several organizations, most notably American Red Cross, American Field Service, and the Presbyterian Church. He and Betty opened their home to many foreign exchange students, and cultivated international understanding by example. He served his church as a deacon and elder, and loyal advocate of God's love.

A Celebration of Bill's life will be held on Saturday, April 30, 2011 at 1:00 PM at the MEMORIAL PRESBYTERIAN CHURCH (803 College Ave. Appleton) with. In lieu of flowers memorials may be made to a memorial of your choice in Bill's name.