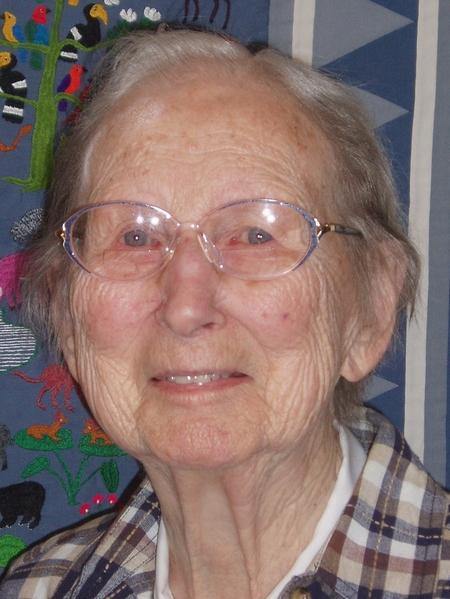 Passed the challenge and opportunity of making the world a better place through volunteerism to us on Sunday, November 11, 2012. She completed her work and moved on to eternal grace after a short illness.
Billie's life serves as an example for women and men everywhere. She was born in Altoona, Wisconsin on March 8, 1914 to Matilda and William Harms. William was killed on the railroad just before Billie was born. She and her mother moved to Appleton when Billie was eight where her mother married George Wiebke who owned and operated the Outagamie Hardware Store in downtown Appleton. Billie worked in the hardware store and graduated from Appleton High School. She attended and graduated from Lawrence University in 1937.
Billie's chosen career was teaching. She taught English and Physical Education in Medford Wisconsin before World War II, Physical Education at Hortonville High School in the 1960s and English as a Second Language in the 1970s in the Appleton schools. In the 1980s, she started a volunteer organization dedicated to teaching English speaking, reading, and writing to anyone who has the desire to learn. The organization grew to train over 50 volunteers and was incorporated as Literacy Education Services Inc. LESI continues to pursue that mission in its home at the First United Methodist Church in Appleton. LESI trains volunteer tutors to use Mrs. Pollard's unique approach to learning English through practical experience linked to more traditional workbook exercises. This innovative style has proven very successful in helping people of all ages who begin their studies able to speak but sometimes not read their native language. LESI has helped many new U.S. residents including the Hmong Vietnam war refugees, Hispanic and others. In addition to English, LESI aided many immigrants earn their U.S. Citizenship. Billie never stopped teaching and tutoring, but she turned the LESI organization over to younger leadership in 2004. LESI continues to function as a sound organization of volunteers devoted to literacy as a path to a better life.
Billie received numerous awards for her work; including the 10 Most Admired Senior Citizens in Wisconsin in 1993, The George B. Walter Service to Society award from Lawrence University in 2002 and the Community Service Award from the Appleton Chapter of the Daughters of American Republic in 2008. She was a lifetime member and volunteer for the Girl Scouts of America.
Billie balanced her career with a fruitful family and spiritual life. In 1944 she married Perry Pollard who served in WWII as a B-17 aircraft navigator and was a loving mother to two sons David and Bruce. David is an Eagle Scout, graduated from Northwestern University, and received his PhD in Physics from the University of California. He now resides in Palo Alto Ca with his wife Bonnie. Bruce graduated from Carroll University and received his PhD in Chemistry from the University of Florida. He resides in Houston with his wife Susan and son William, 13. Bruce and Susan also have two daughters Meredith, 21, and Rachel, 19, currently attending Boston University. Billie was a member of the First United Methodist church where she worshipped, taught religious school and found a home for her literacy organization.
A visitation will be held at the WICHMANN FUNERAL HOME, 537 N. Superior St., from 5-7 PM on Monday, November 12, 2012. A celebration and confirmation of eternal life will be held at FIRST UNITED METHODIST CHURCH, 325 East Franklin St., on Tuesday, November 13, 2012 at 11 AM with a visiting hour at 10 AM. Rev. Dr. E. Doyle Blanton will officiate services. Private entombment will take place at Highland Memorial Park. Anyone wishing to honor Billie, can do so by contributing to Literacy Education Services, 325 E. Franklin St., Appleton, WI 54911 or by volunteering their time to improve the lives of people anywhere.