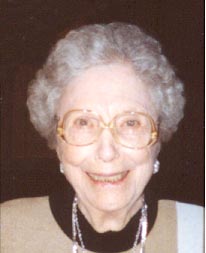 Weltha Smudde, age 94, passed away peacefully on Tuesday, March 15, 2006 at St. Paul Elder Services in Kaukauna. Weltha was born in Freedom on March 1, 1912 to the late James and Estelle (Powers) Shillcox. On July 2, 1934, she was united in marriage to the late Benedict Smudde at Holy Cross Church in Kaukauna. Weltha attended normal school, and later worked at the Agricultural Adjustment Association, the Federal Tax Branch in Appleton, and at Advance Industries. She enjoyed music and sang with the Chaminade Chorus for several years. She also enjoyed reading, watching Packer games, and spending time with her grandchildren.

She is survived by two daughters: Virginia (Keith) Siebers of Green Valley, Arizona and Ruth (Conrad) Ritter of Appleton; a son: William (Pat) Smudde of Pace Florida; two granddaughters: Karen (Mike) Fink of Waukesha and Natalie Siebers of Tucson; four grandsons: Bart (Pattie) Smudde of Suwannee, Georgia; Brian Smudde of West Allis; Kevin (Brenda) Smudde of Pace, Florida; and Eric (Pam) Siebers of Seymour; there are also eleven great-grandchildren; a sister: Mary (Earl) Probst of Appleton; two brothers: Wayne (Germaine) Shillcox of Appleton and James (Lorraine) Shillcox of DePere; two sisters-in-law: Nellie Shillcox of Kaukauna and Agnes Smudde of Freedom; as well as many nieces and nephews. Weltha was preceded in death by her husband Benedict after fifty years of marriage in 1984, an infant son Bennie in May of 1935, brothers John Shillcox and Grant Shillcox, and fifteen brothers and sisters-in-law.

The funeral liturgy will be held at 10:00 AM on Saturday, March 18, 2006 at HOLY CROSS CATHOLIC CHURCH, 309 Desnoyer Street in Kaukauna, with Fr. Martin Fox officiating. Interment will be in the parish cemetery. Friends may call Saturday, directly at the church, from 8:30 AM until the hour of the service. In lieu of flowers, the family has established a memorial fund in Weltha‚Äôs name.

The family would like to express their deep appreciation to Dr. Jack C. Anderson and to the entire staff at St. Paul Elder Services.