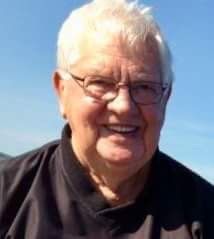 Wayne was born May 29, 1932 in Hebron, WI to the late William and Ruby (Westphal) Kreklow. He was preceded in death, by his 6 siblings: US Army 1st Lt. Walter, US Army Technical Sgt. Theodore, US Army Flight Officer William, and his dear sisters, Louise (Kutz), Frances (Hanson)(Berg) and Mildred (Heitzler).

Wayne was active in the church his whole life. He was confirmed at St. John’s Lutheran Church in Jefferson, WI. Wayne married his life-long sweetheart, Joanne (Gering) in Jefferson, WI, in 1954, at St. Mark’s Lutheran Church. He and Joanne were married for almost 64 years and together raised six children. They always enjoyed traveling and long car rides to visit their children, grandchildren and great grandchildren. Joanne was selfless in caring for him until the end, and the love they shared filled the room.

Wayne always found enjoyment in teaching and coaching. He taught and coached for 42 years. He taught in Hart and Howell MI, from 1954-1959, at Lakeside Lutheran, Lake Mills, WI from 1959-1967, Dodge County Teachers College from 1969-1971 and in Neenah, WI from 1972-1995. He mentored many student teachers. He felt extra-curricular activities and youth sports were important in education. He coached many sports over the years and eventually ended his career as an athletic director. He won many games, championships and awards over his career, but none of that meant as much to Wayne as the students and athletes themselves. He truly loved children and he used his gifts to their full potential.

Wayne was an all around sports fan and enjoyed watching the Packers, Badgers and Cubs. He always hoped to see the Cubs win another World Series and never let us forget they did.

Nothing gave Wayne more joy over the years, than watching his children and grandchildren participate in school, music and sports activities. He drove many miles to their activities and watched every game he could on television or the internet. He checked almost all report cards and read every word with each child. He was so proud of every single accomplishment, but always encouraged humbleness. He always kept his sense of humor and had a twinkle in his eye. His light hearted teasing and quick wit was always welcomed and will be passed on.

Memorial services will be held at 1:00 pm, on February 10, 2018, at Peace Lutheran Church, 1228 S. Park Ave., Neenah, with Rev. Ricky P. Schroeder officiating. Inurnment will be held at Union Cemetery, Jefferson, at a later date.

Wayne always took care of people. In lieu of flowers, he has requested, memorial donations be made to the Wayne Kreklow Memorial Education Fund, to assist families affected by domestic violence, poverty, and to help them reach their educational goals.

A special thank you to all the staff at Ascension Hospice Care, Valley Nurses Association and Wally’s Wish Home Care. We are especially grateful for the compassionate care of Makenzie, Teara and Crystal.