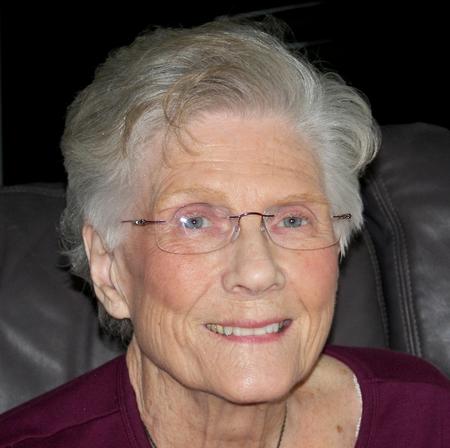 Virginia M. ‚ÄúBunny‚Äù Caldie joined her heavenly family on February 23, 2011. Bunny was born on April 27, 1923, the daughter of the late Karl and Katherine Jahnke. She was a faithful member of First United Methodist Church in Appleton, Wisconsin. Bunny attended and graduated from Appleton High School. In 1942, she married her high school sweetheart, Roger ‚ÄúRoge‚Äù Caldie. They shared 50 years together and were privileged to celebrate their 50th wedding anniversary before Roger‚Äôs death on June 6, 1992.
Bunny completed post-high school education in Green Bay and was employed at Kimberly Clark Corporation in Kimberly, WI. She worked for J.C. Penney Co. and retired from there with 25 years of service. She was a member of the 342 Club of retired J.C. Penney employees from #342 Store. Bunny was an Election Inspector for the City of Appleton for many years. She was a member of the National Association of Retired Federal Employees and enjoyed her Monday morning Bible Study Classes at her church.
Bunny is survived by two sons, Michael Caldie of Ft. Myers, Florida and Scott (Jeanne) Caldie of Audubon, Pennsylvania; three grandchildren, Laura (Chris) Richardson of Oakland, California, Kristen (Michael) Johnson of Chicago, Illinois, and Andrew Brock of California; four great-grandchildren, Janet, Thomas and Ellie Richardson and Morgan Johnson; a brother, Paul (Grayce) Jahnke of Plymouth, Minnesota; a sister, Lois Krueger, Appleton; a sister-in-law, Maggie Jahnke of Petal, Mississippi; a son-in-law, Richard (Mary) Brock; as well as her special friend and loving companion, Vernon ‚ÄúSchmitty‚Äù Schmit and her long-time friends, Darlene Sayler and Elaine Lillge. Bunny is further survived by several nieces and nephews, Lynn Krueger Spicer, Tom Jahnke, Terry (Tim) Sauer, Beth DeMuth, Karl Jahnke, and Marti Jahnke.
She was further preceded in death by her beloved husband, Roger in 1992; her beloved daughter, Kay Lee Brock in 1993; her brothers, Dan Jahnke and James Jahnke; and her nephew, Jeffrey Krueger.
The Christian funeral service for Virginia will be held at 11:00 a.m. on Monday, February 28, 2011 at the FIRST UNITED METHODIST CHURCH, 325 East Franklin Street, Appleton, with Dr. Doyle Blanton officiating. Friends may call from 5:00 p.m. until 7:00 p.m. on Sunday, February 27, 2011 at the WICHMANN FUNERAL HOME, and at church on Monday from 10:00 a.m. until the time of the service. Entombment will be held at Highland Memorial Park, Appleton.

To Reach Out, To Pray, To Struggle, To Give, To Remember, To Have Loved, To Have Friends, “This is to have lived”, ‚ÄôTil we meet again.
~ Bunny