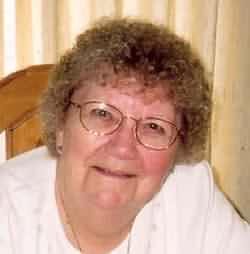 PICTURE
Age 77, passed away on Friday, May 16, 2003 at Appleton Medical Center after a courageous three week battle against complications and injuries from an automobile accident. She was born on December 10, 1925 in Appleton the daughter of the late Henry and Christiana (Hoeft) Goerl. She graduated from Appleton High School in 1943; and was very active in organizing class reunions and monthly luncheons. On September 4, 1948 she married James Pulling in Appleton. Ginnie was also very active in the committee that designed and placed a World War II Memorial that honored those who were lost in the war from the high school classes of 1942 to1945. Ginnie was a member of Memorial Presbyterian Church for over 50 years and helped with the church bulletins and newsletters. She also loved to work on crossword puzzles, knitting, and crocheting. In her earlier years, Ginnie enjoyed camping and square dancing.
She is survived by her four children: Michael Pulling of San Diego, California; Krista (Jeff) Mischler of Kimberly; Steve (Ronnie Kolotkin) Pulling of Durham, North Carolina; and Amy (Jeff) Biese of Appleton; her four grandchildren: Venesha Jones of Appleton, Melissa (Jesse) Quintanilla of Andover, Minnesota, Christopher Biese of Appleton, and Travis Pulling of Durham, North Carolina; two great grandsons Darius Sargent and Mekhi Quintanilla. Ginnie is also survived by her two brothers Gaylord (Elaine) Goerl of Appleton and Ralph Goerl of Combined Locks, a sister-in-law Ceil Goerl of Appleton; sister-in-law and brother-in-law Jane (Pulling) and Tom Arbogast, a very special friend of 40 years Sharon (Bob) Wierschke, and several nieces, nephews, cousins, and friends.
She was preceded in death by her husband James Pulling in 1998, her infant son Richard Alan in 1952,
a brother Roger Goerl, and a sister-in-law Sharon Goerl.
Funeral services will be conducted on Tuesday, May 20, 2003 at 10:30 AM at Memorial Presbyterian Church, 803 East College Avenue in Appleton with the Rev. Charles Valenti-Hein officiating. Interment will take place at Highland Memorial Park. Friends may call at the Wichmann Funeral Home on Monday from 4-8 PM and on Tuesday at the church from 9:30 AM until the time of the service. A memorial fund is being established.