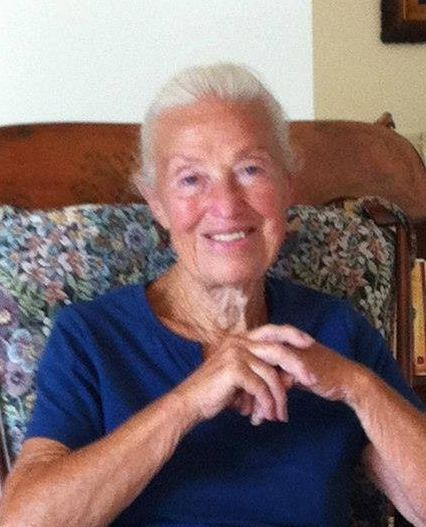 Virginia Ayres, age 87, passed away peacefully on the morning of December 18, 2014 at her home. Virginia was born on the family farm near High Cliff on April 22, 1927, daughter of the late William and Clara (Geadtke) Buelow. Being a true farm girl, she enjoyed all of nature during her childhood as well as an adult.

Virginia learned to shoot archery as a young woman. She was a founding member of the Winnebago Archery Club and was the 1955 state outdoor archery tournament champion. She was also the champion of the 1958 Necedah broad head tournament, one of the biggest in the country. Her love of archery and the outdoors lead her to a love of hunting. She shot her first deer at 35 yards right through the heart. Virginia was an avid reader and loved to bake bread with her grandchildren. She cherished the time she could spend outside in the sun on nature walks, camping or working in her famous garden. She grew everything from herbs and flowers, to strawberries and currants. Above all she was focused on her family. Her grandchildren and great grandchildren will always hold a special place for her in their hearts, for making them the people they are today.

Virginia will be missed by her daughters: Jamie (Mark) Ayres-Bendixen, Paula Ayres and Sally (Bill) Ayres-Wendt; her grandchildren: April and Alissa Ayres, Ryan and Dylan Brewer, and Brent, Drew and Nicholas Bendixen; great grandchildren: Brooklyn, Cael and Willow. She is further survived by her former husband Jim Ayres; and brothers: Ralph “Putt” (Carol) Buelow and Roy (Janice) Buelow; as well as many nieces, nephews, other relatives and friends. She was preceded in death by her parents; sister: Angeline Seif and half-sister: Harriet Miller; brothers: Robert and Huntz Buelow.

The Ayres family would like to thank the Appleton Area Emergency staff, especially Sgt. Andy Miles and Wichmanns Funeral Home staff for their kindness and compassion during this difficult time.

A private family service will be held at a later date. Online condolences may be expressed at www.wichmannfargo.com. In lieu of flowers, donations may be sent Jamie Ayers, N6490 Buelow Road, New London, WI 54961