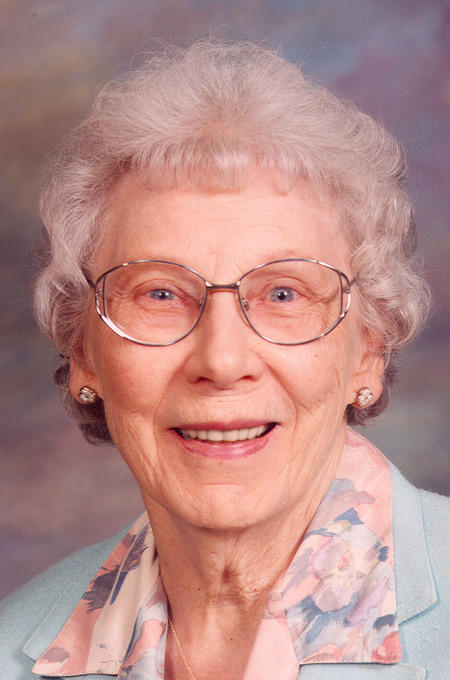 Viola Grunwaldt, age 94 passed away Friday, September 11, 2009 at Peabody Manor in Appleton, Wisconsin. Viola, the seventh of nine children of Charles and Lydia (Schmeichel) Wussow, was born July 17, 1915 in the farm home of her parents located several miles south of Bonduel, Wisconsin. Her younger sister, Clara Charles (Shawano, WI) is the only surviving sibling. After graduating from Shawano High School (1933) and obtaining a Teaching Certificate from Shawano Normal School (1934), she taught two years at Sohr's school, an eight grade country school, located east of Bonduel.

Viola married Carl Grunwaldt on June 20, 1936. He passed away on January 13, 1947 as a result of a farming accident. Following her husband's death, Viola sold the family farm in the Township of Cicero, Outagamie County and returned to teaching to support her young family. She taught eight grades at North Seymour Elementary school, 7th and 8th grades at Seymour Elementary school and from 1960 to her retirement in 1977, at Appleton West and James Madison, Wilson, Roosevelt Junior High Schools where she taught remedial reading. She was a 1951 graduate of Wisconsin State College-Oshkosh obtaining a BS in Upper Elementary Education and later took graduate level classes.

Viola loved being with her immediate and extended family. She often took her young children to visit relatives living in various parts of the U.S. On numerous occasions she organized family gatherings at her home located on South Lawe Street, Appleton, and later at Heritage Wood Manor, where she moved to following her retirement. In a recent diary she wrote, “If I could spend a day exactly as I liked, I would choose to have my entire family with me. It would not matter what we did-just to see them and their reactions to each other would be perfect joy!” Throughout her life she was very active in the United Methodist Women and her churches. During her retirement years she often traveled to see her children and sewed hundreds of children's quilts to donate to those in need.