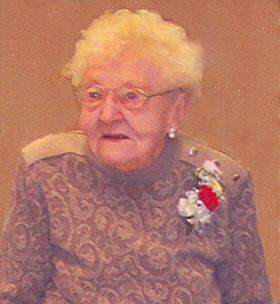 Viola D. “Vi” VanRyzin, age 100, passed away on Tuesday, August 24, 2010, at Appleton Health Center. Vi was born on September 29, 1909, in Kaukauna, the daughter of late Edward and Alvina (Fleith) Mitchell. She married Henry Van Ryzin on June 7, 1952; he preceded her in death in March 1974. Vi worked at the Fox River Paper Company for many years and then worked for Hopfensberger Meat Market. She was a long-time member of the Mount Olive Ev. Lutheran Church, Appleton. In her spare time she enjoyed embroidery work, crocheting, playing cards, bingo, puzzles and gardening. She also had a love for music and dancing. Vi loved outdoor sports with her family. Her family was the center of her life. Vi is survived by two daughters, Marion (Doug) Steward, of Appleton, and Beverly (Reuben) Stingle, of Black Creek; eight grandchildren; 13 great-grandchildren; four great-great-grandchildren; and three step-grandchildren. She was preceded in death by her four brothers, Edward Mitchell, Henry Mitchell, Clarence Mitchell and Lester Mitchell.
Funeral services for Vi will be held at 11:00 a.m. on Friday, August 27, 2010, at MOUNT OLIVE EV. LUTHERAN CHURCH, 930 E. Florida Avenue, Appleton, with Rev. Joel Zank presiding. Visitation will be held at the church on Friday from 9:00 a.m. until the time of the service. Interment will be at Highland Memorial Park, Appleton. The family would like to extend a sincere thank you to Scott and Heidi at Appleton Health Care; the staff at Renaissance Assisted Living, and ThedaCare Home Hospice, especially nurse Suzi.