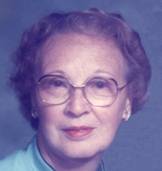 Age 91, passed away peacefully on Friday, March 18, 2005 at Kindred Hearts in Kaukauna. Villa was born in Grafton on April 14, 1913, daughter of the late William and Delia (Poggenburg) Mueller. She graduated from Grafton High School in 1930, and received a Bachelor of Arts degree in Spanish from Lawrence University in 1934. On June 15, 1935, she married LeRoy Seifert in Grafton; LeRoy preceded her in death on May 5, 2003. Villa loved plants, flowers, and nature. She especially loved animals and would often send a sick or injured animal to Thousand Islands Environmental Center. Villa also donated regularly to various environmental organizations. Villa served on the board of directors of the Pied Piper Nursery School, was a member of the Immanuel United Church of Christ‚Äôs Building Committee and Women‚Äôs Circles of the church, the Thousand Islands Environmental Center, the Fox Valley Historical Society, the Fox Valley Golf Club, and the Order of the Eastern Star. Villa loved to dance and was an accomplished ballerina in her youth. She and her husband enjoyed traveling throughout the United States and abroad, and treasured their time together enjoying Friday fish fry‚Äôs and Sunday chicken at Van Abel‚Äôs of Hollandtown.

Villa is survived by a brother-in-law: Edwin and Lois Seifert of Neenah; nephew: David Seifert of Neenah; three nieces: Pamela Seifert of Green Bay, Donna Seifert-Baumgarner of Morgan Hills, California, and Karen Seifert-Eaves of Issaquah, Washington; two cousins: Edward Ladenburger of Belvidere, Illinois and Phyllis Nieman of Cedarburg; as well as her dear friends Bob and Marge Willis of Kaukauna and their children Roxanne and Matt. She was preceded in death by her parents, her husband LeRoy in 2003, and a brother-in-law Donald Seifert.

Funeral services for Villa will be held at 11:00 AM on Tuesday, March 29, 2005 at IMMANUEL UNITED CHURCH OF CHRIST, 510 Sullivan Avenue in Kaukauna with Rev. Melinda Feller officiating. Interment will follow in Immanuel Cemetery, Cedarburg. Friends may call directly at the church on Tuesday from 10:00 AM until the hour of the service.

The family would like to extend their sincere thanks to the staff at Kindred Hearts for the excellent care given to Villa during her stay.