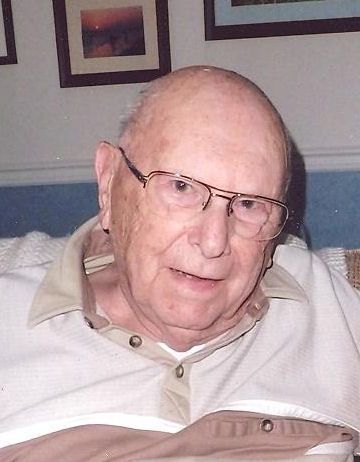 Victor Dennis Werner, age 95, of Appleton, passed away with his loving family by this side on the morning of April 2, 2015 at his home. Victor was born July 4, 1919 in Brillion to the late Dennis and Lillian (Schwaller) Werner. He was the third of five children. Early on, Victor had proved to be a smart and creative child. He graduated from Appleton High School in 1938. After graduation he studied drafting at Technical School. Before military service he worked at A. W. Council Company as a draftsman.

At the start of World War II, Victor enlisted in the Army Air Corp. As the war continued, he was stationed in Baik Island near New Guinea as Staff Sargent. While he was stationed in St. Louis, he met the love of his life, Hazel Bohl. They were married September 19, 1942, sharing 67 years of happy memories before her passing in 2010.

In 1945 Victor began his career at Kimberly-Clark Badger Globe Mill. While there, he started the research and development department. With his creativity he developed many patents. He retired from Kimberly-Clark in 1976. In his retirement, he developed an interest in the workings of clocks. He opened a clock repair shop with his daughter-in-law Mary. He was very proud to be featured in the National Association of Watch and Clock Collectors. Dad had The Clock Shop until 2008.
Victor spent his last years visiting his children and their families. His travels took him to Arizona, Minnesota and Wisconsin. He took pride in remembering each family member with birthday cards. He was especially proud his three sons followed him in his military footsteps. He was eagerly looking forward in May to a dedication wall in Chilton including his name along with his son's years of military service.

He was preceded in death by his wife, Hazel, an infant son, David, his parents and siblings Eunice, Francis and Delores.

Funeral Liturgy will be Wednesday, April 8, 2015 at 11:00 am at Sacred Heart Catholic Church with Fr. Brian Wideman officiating. Visitation will be at 9:30 am until time of service. Burial will be at St. Joseph Cemetery with full military honors.

The family wishes to say a special thank you to Joe Olk…Dad's daily coffee buddy and very best friend.