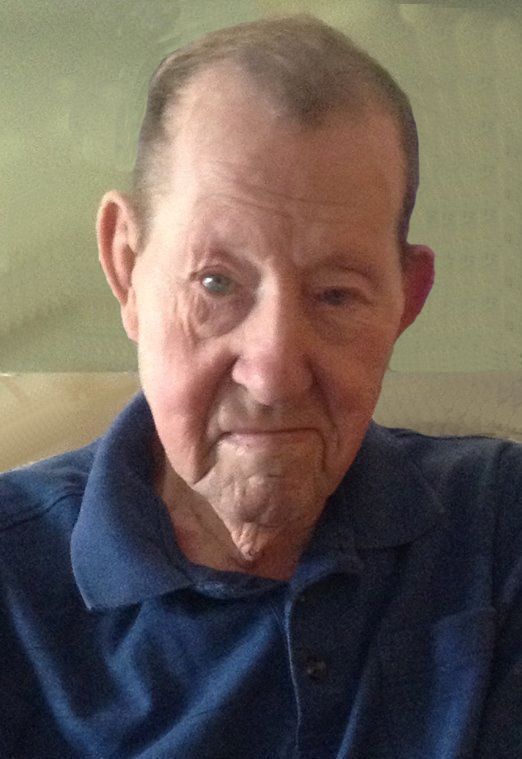 Vernon M. Rougeux, age 88, passed away peacefully on Wednesday, May 6, 2015 at Elder Lodge Assisted Living in Neenah. Vernon was born in Kato, PA on October 9, 1926, the son of the late Alfred and Delilah (Painter) Rougeux. He attended a one room school house in Frenchville, PA through 8th grade and then helped on his family farm during the Great Depression, until being drafted into the United States Army in 1945, where he proudly served his country in WWII in the 1st Cavalry Division, the 77th Infantry “Statue of Liberty” Division and the 81st Infantry “Wild Cat” Division. He worked for General Electric in Erie, PA for a brief while before moving to Menasha in 1947 where he began his career with Kimberly-Clark Corporation at the Lakeview Plant, retiring in 1987.
On May 20, 1950, he was united in marriage to Genevieve (Boehnlein) Rougeux. They were married for over 55 years. Genevieve preceded him in death on November 2, 2005.
In his earlier years, Vernon loved to take his family on summer trips to various cottages in northern Wisconsin, along with travelling back to his boyhood home in Frenchville, PA for family reunions.
Vernon is survived by four children: Mike (Betsy) Rougeux, Neenah; Dave (Renee) Rougeux, Neenah; Al (Melody) Rougeux, Hortonville; and Jim (Sherry) Rougeux, Neenah; eight grandchildren: Scott (Linda) Rougeux, Chris and Ryan Rougeux, Derek (Teresa) Kees, Krista Rougeux, Lindsay and Meagan Wells, and Jackson Rougeux; eight great-grandchildren: Hannah and Jacob Rougeux, Steven Rougeux, Daniel, Adam and Ryan Kees, Bella Rougeux, and Pearl Rougeux; and one sibling, Ed Rougeux. He is further survived by a sister-in-law, Betty Zimmer, and brothers-in-law: Jim Boehnlein and Jack Boehnlein; as well as many nieces and nephews.
Preceding him in death were his parents and wife, brothers James, Sheridan and Francis; sister Mary; brothers-in-law: James Wiegand, Ray Kramarczyk and sisters-in-law: Rose Kramarczyk, Elaine Boehnlein and Georgeann Wiegand.
A Funeral Mass will be held at 11:00 am on Tuesday, May 12, 2015 at St. John the Baptist Catholic Church, 516 De Pere Street in Menasha, with Fr. Paul Paider officiating. Visitation will be held from 9:30 am until the hour of the Mass at the church. Military Honors will follow the Mass. Interment will take place in St. John Cemetery in the Town of Menasha. In lieu of flowers, a memorial has been established in Vernon's name.
The family extends special thanks to Theresa and the caring staff at Elder Lodge Assisted Living and Hospice Advantage.
Dad – you have made some remarkable recoveries over the last ten years (surprising us all) since suffering a stroke five weeks after mom's passing and we have been so fortunate to be able to spend this time with you!