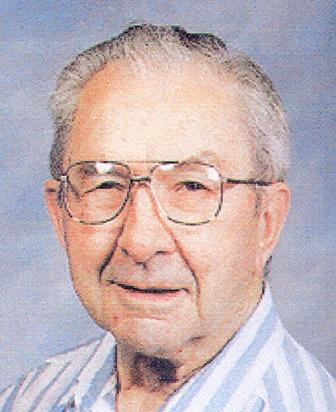 Vernon J. Jochman, age 94, of Appleton, passed away Friday morning, July 18, 2008, at St. Paul Home. He was born March 29, 1914, to the late Henry and Anna (Dietz) Jochman, in the Town of Center and had been an Appleton area resident all of his life. Vernon married Gladys Ciha on November 25, 1943; she preceded him in death in 1995. He served with the U. S. Army during WW II, in the European Theater and landed in France on D-Day plus 6. He was in the Battle of the Bulge and received the Silver Star. Following his discharge, Vernon returned to this area and farmed in the Town of Center until his retirement in 1983, at which time he moved to Appleton. He was a member of St. Thomas More Catholic Church and the Black Creek American Legion Post #106. He is survived by three sisters, Gertrude Langenhuizen, AZ; Arlene Conti, NY; Doris (James) VandenHeuvel, Greenleaf; four brothers, Lawrence (Veronica) Jochman, Appleton; Cyril (Margaret) Jochman, Appleton; Edward Jochman, Appleton; Melvin (Doris) Jochman, Darboy; sisters-in-law, Virginia (Ciha) Van Iten, Green Bay; Geraldine (Ciha) Withagen, Appleton; a brother-in-law, Herman Ciha, Kimberly; 64 nieces and nephews. He was preceded in death by two brothers, Harvey (Leone) Jochman, Ervin Jochman, two sisters, Leone (Robert) Weyenberg, Viola (Cliff) Moser, brothers-in-law, John Langenhuizen, Enzo Conti, Don Brochtrup and Alden Van Iten, sisters-n-law, Eunice Jochman and Rita Ciha. The funeral liturgy for Vernon will be held at 11:00 am, Monday, July 21, 2008 at ST THOMAS MORE CATHOLIC CHURCH, 1810 North McDonald Street, with Father Gerald R. Falk officiating. Burial will be in St. Edwards Cemetery, Mackville. Friends may call at the funeral home from 4 – 8 pm, Sunday and at the church on Monday from 10:00 am, until the time of the mass. There will be a parish prayer and scripture service at 7:00 pm, Sunday. A memorial fund is being established.

The family would like to thank the staff of St. Paul Villa and St. Paul Home for their loving care.