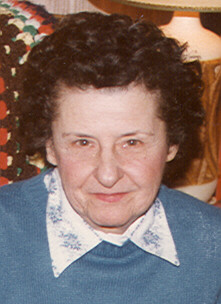 She was born February 15, 1920, in Polar, the daughter of the late William and Lena (Hose) Brandt. After her younger sister Margaret was born, the Brandt family moved to Appleton. Vera attended St. Matthew Ev. Lutheran School and Wilson Junior High.
Her interests included roller skating, going to dances, and later, playing in pool leagues and bowling leagues.
Vera married Norman Portmann, and together were blessed with four children. Norman passed away unexpectedly in 1976. Vera later married Walter ‚ÄúWally‚Äù Gunther, and they moved to Neenah. He preceded her in death. She then married Floyd DeLain, and he preceded her in death.

Funeral services for Vera will be at 11:00 a.m. Tuesday, October 3, 2006, at ST. MATTHEW EV. LUTHERAN CHURCH, 129 South Mason Street, Appleton, with Rev. Jason Oakland officiating. Interment will be in Appleton Highland Memorial Park. Friends may call from 9:00 a.m. Tuesday until the time of services directly at the church.
A memorial fund in Vera‚Äôs name is being established by the family.

We love you, we miss you, you will always be in our hearts. Your loving family.