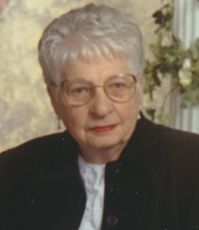 Velda E. Schattl, age 97, passed away on January 11, 2016. She was born November 1, 1918 in the Town of Aniwa, Shawano County, Wisconsin, daughter of the late Emil and Caroline (Krull) Umland. She attended grade school in Birnamwood, Wisconsin, high school in Illinois. She attended State Teachers College in Oshkosh, Wisconsin. She worked as a bookkeeper at various businesses in the Appleton area. On February 20, 1939 she was united in marriage to Alfred W. Schattl who preceded her in death on December 6, 1994. She was an active member of Prince of Peace Lutheran Church and its WELCA and Chronologically Gifted organizations and Deborah Circle. She enjoyed traveling and volunteering at church making quilts for Lutheran World Relief and local charities for 34 years.
She is survived by her daughter, Karen Borsche of Appleton, granddaughter Gretchen (Samuel) Wilson, three grandchildren, Bridget, Coleman and Gillian of The Woodlands, Texas.
She is further survived by a half-sister, Kay Paulson of DePere, Wisconsin, sister-in-law Helen Viegut, brother-in-law Robert (Carmen) Schattl, of Appleton, and brother-in-law George Schweitzer of Antigo, Wisconsin and many nieces and nephews.
In addition to her parents, she was preceded in death by an infant son, husband, Alfred, stepmothers Clara Umland and Martell Umland, a half-brother Allan Umland, step-brother Donald Umland, son-in-law Gerald Borsche, brother-in-law Melvin Viegut.
Funeral services will be held at 11:00 a.m. on Saturday, January 16, 2016 at Prince of Peace Lutheran Church at 2330 E. Calumet St., Appleton, Wisconsin, with Pastor Roger McQuistion officiating.
Friends may call at the church from 10:00 a.m. until time of service. Interment will be at Highland Memorial Park, Appleton.
In lieu of flowers, a memorial fund has been established in Velda's name benefiting Prince of Peace Lutheran Church and the Fox Valley Lutheran Homes. Online condolences may be expressed at www.wichmannfargo.com.