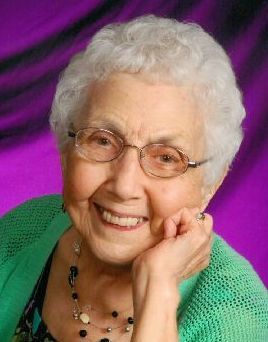 Valeria Minnie Rohde, 89, was carried in the arms of Jesus to her eternal home on Thursday, July 7th. Valeria was born in the Town of Herman, the daughter of the late Walter & Adelia “Roethel” Damrow. She attended grade school at Green Bay Road School and was confirmed at Trinity Lutheran Church in Howards Grove in 1941. She was united in marriage to Walter Rohde on April 19, 1947. They were married for 67 years. He proceeded her in death on February 6, 2015. In her younger years she taught Sunday School and Vacation Bible School. She was a past secretary of Trinity Ladies Aid. Valeria was a Kindergarten assistant in the Howards Grove School District and prior to her retirement was employed at Lakeland Manufacturing Company for 21 years. Her Christian faith was the anchor of her life and her family was her greatest joy. She loved traveling with her husband and they visited all states, with the exception of Texas. She had a passion for cooking, baking, reading, and sewing. She also greatly enjoyed the outdoors and gardening. Walter and Valeria moved to Appleton together in May of 2013 and resided at the Appleton Retirement Community. She greatly enjoyed the community of friends and staff there. She was a member at Faith Lutheran Church in Appleton.
Through the years, Valeria has touched many with her recognizable envelopes, covered by her handwritten one-line notes revealing her faith, quiet wisdom and sense of humor. This was one of her ways of doing mission work to those she loved and the postal carriers handling the mail.
Valeria is survived by her children: Roger (Loretta) of Bremen, Indiana; Linda (Jim) Burkhardt of Appleton; grandchildren: Jason (Lindsey) Rohde, Jon (Sarah) Rohde, Andrew (Jessica) Rohde, Joshua (Amber) Rohde, Deborah (Joshua) Yoder, Erin (Matthew) Krueger, and Michelle (Matthew) Dufek; sister, Alice Jaschob; brother-in law, Ken Korb and 14 great grandchildren with one more on the way.
Valeria was preceded in death by her parents, Walter & Adelia Damrow; brothers, Milton (LaVerna) Damrow, Ebbie (Marie) Damrow; sister, Elva (Raymond) Herzog; brother-in-law Allen Jaschob and daughter-in-law, Jeri (Ottensmann) Rohde.
The funeral service will be held on Tuesday, July 12, 2016 at 10:30 a.m. at FAITH LUTHERAN CHURCH, 601 E. Glendale Avenue, Appleton. A time of visitation will be held on Tuesday starting at 9:00 a.m. until the service at 10:30 a.m. at church with Rev. Daniel Thews officiating. Interment will be held at Sunrise Memorial Cemetery in Sheboygan at a later date. In lieu of flowers, memorial donations to Faith Lutheran Church are appreciated. Online condolences can be offered at www.wichmannfargo.com.
Valeria's family would like to thank the staffs at ThedaCare Regional Medical Center Appleton and ThedaCare Hospice for all of their loving care.