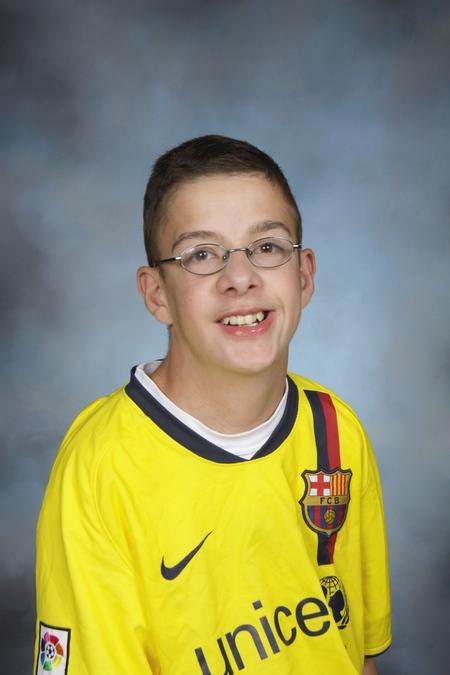 Tyler Jeffrey Baseman, age 17, of Appleton, died in an accidental drowning on Tuesday, July 26, 2011 at Rock Lake in Lake Mills, Wisconsin. He was born in Chicago on April 19, 1994, son of Edward and Judith (Zimmermann) Baseman. Tyler would have been a junior at Appleton East High School this fall.

Tyler loved Appleton East High School and cheered for all the athletic teams especially the Patriot basketball team on the road to state. He enjoyed singing in the East High School Patriot and Varsity Men's choirs and played the cello in the orchestra. The family gives thanks to the many teachers, principals and support staff in the Appleton Area School District who have worked with Tyler since the age of three, especially those in the Early Childhood and Special Education programs at Janet Berry Elementary School, Horizons Elementary School, Madison Middle School, and Appleton East High School. These wonderful people saw Tyler's potential and encouraged him to be the best he could be.

Tyler was active in life at Prince of Peace Lutheran Church and sang in various choirs through the years. The family also gives thanks to Tyler's church family at Prince of Peace and his adopted church family at River Valley Alliance in Watertown, Wisconsin. He enjoyed spending time with his Grandma B. Arleen after school and in the Heritage community garden, loved video games, ANYTHING related to sports, and his dog Sophie. Anyone who knew Tyler loved his happy smile and strength despite the challenges he faced. The family would also like to thank the staff of Affinity Pediatrics, especially the physical and occupational therapy department who began working with Tyler as soon as he moved to Appleton at age 1 1/2.

Tyler is survived by his parents: Edward and Judith Baseman; his brother, Erik of Appleton; his paternal grandmother: Arleen Baseman of Appleton; and numerous uncles, aunts, cousins, and friends that loved him very much. He was preceded in death by his maternal grandparents, Jack and Elaine Zimmermann of Watertown and his paternal grandfather, Elwood Baseman of Omaha, Nebraska. Tyler, we are so proud of you!

The funeral service for Tyler will be held at 10:30 am on Saturday, July 30, 2011 at PRINCE OF PEACE LUTHERAN CHURCH, 2330 E. Calumet Street, Appleton. Rev. Gary Nokleberg and Rev. Roger McQuistion will be officiating. Interment will be at Riverside Cemetery immediately following the service. Visitation will be held at the CHURCH on Friday from 4:00 pm until 8:00 pm and again on Saturday from 9:00 am until the time of service. Memorials to Prince of Peace Lutheran Church are appreciated.