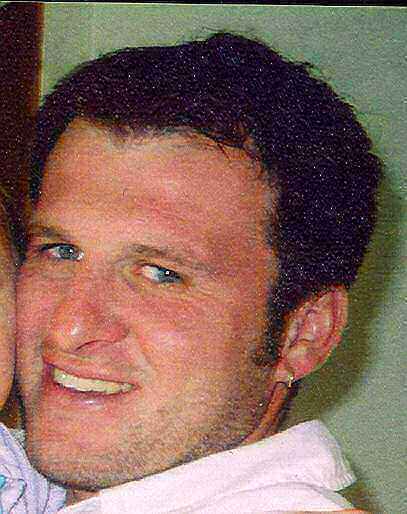 Age 33, passed away Thursday, August 25, 2005, at Theda Clark Medical Center, Neenah, as the result of a motorcycle accident.
Travis was born April 24, 1972, in Two Rivers, the son of Thomas and Cynthia (Wiese) Notz, Appleton. He was a 1990 graduate of Appleton East High School. In his younger years, Travis enjoyed BMX biking and skateboarding, and was a brown belt in karate.
Travis was united in marriage with Laurie Komp on May 11, 2001, at St. Mary Catholic Church, Appleton. He was the owner of Notz Builders for the past five years, and was an extremely hard worker and a natural born carpenter who took great pride in his craftsmanship. When not working, Travis loved spending time with his children, and enjoyed being a father.

Survivors include his wife, Laurie; his daughter, Chloe, and his son, Elijah; his parents, Thomas and Cynthia; a brother, Troy (Nicole) Notz, and their children, Zachery and Ashleigh, Sunrise, Fla.; two sisters, Shawnalee (Dennis) Scharenbroch, and their children, Anastasia and Athena, Shiocton, and Shana (Travis) Uhlenbrauck, Neenah; his maternal grandmother, Estelle Wiese, Two Rivers; his father and mother-in-law, Ronald and Beverly Komp, Appleton, and three brothers-in-law, Brian Komp, and his son, Kyle, Craig (Twila) Komp, and Scott Komp, all of Appleton. He was preceded in death by his maternal grandfather, Frank Wiese, and paternal grandparents, Kenneth and Katheryn Notz, an uncle, Arvid Siegel, and cousins, Anna Siegel, Shad Siegel, and Debbie Kupsch.

The funeral mass for Travis will be celebrated at 11:00 a.m. Tuesday, August 30, 2005, at ST. MARY CATHOLIC CHURCH, 312 South State Street, Appleton, with Father Michael O‚ÄôRourke as celebrant. Friends may call from 4:00 p.m. until 7:00 p.m. Monday at the funeral home, and again from 10:00 a.m. Tuesday until the time of mass at the church. There will be a parish vigil Monday at 7:00 p.m. at the funeral home. A memorial fund is being established in his name.

Our loving, caring, gentle son
Our hearts are broken-we can feel the emptiness-
You are forever in our hearts-our love for you is endless. Dad and Mom

Travis was a caring, compassionate brother who went out of his way to help others. He was an awesome uncle who did extra things for his nieces and nephews.

You were our brother, we will miss you so, we wish you didn‚Äôt have to go. You were such a great guy, we‚Äôre so sad we have to cry.

We‚Äôll miss you always, all our love, Troy, Shawnalee, and Shana