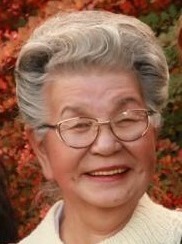 Toshiko Bouwer, age 81, passed away peacefully at her home on Friday night, December 19, 2014. Toshiko was born in Kumagaya, Japan, on November 9, 1933, the eldest of the eight children of Jiro Oyamatsu and Fusayo Hirama. She was educated in Japan, and learned the artistic skills all young Japanese girls learn: sewing, making exquisite garments, and the like. Her father, Jiro, was a local schoolmaster, and while the United States had an Air Force Base near, an airman named Gilbert Bouwer was assigned to make sure that English was being taught in the local schools. Jiro took a liking to Gilbert, and even brought him home for dinner. It was there, that Toshiko met Gilbert, and on March 17, 1959, the couple wed and returned to the United States. For many years the couple owned and operated Bouwer Printing, Inc., a well-respected local company which today is still operated by their children. She helped out in the store when she was able, and also worked as a Manager at Gunderson Cleaners for many years. All the while, Toshiko continued as a model mother and talented homemaker who loved to sew, knit, cook, and bake. She will always be remembered for gladly sharing her talents with the young girls in the neighborhood who were eager to learn them.

A memorial service will be held at 4:00 PM on Tuesday, December 23, 2014 at the Wichmann Funeral Home, Tri County Chapel 1592 Oneida Street in Menasha, with Chaplain Jordan Kuczwara officiating. She will be buried next to Gil at Appleton's Highland Memorial Park. Family and friends are invited to gather at the funeral home on Tuesday afternoon from 2:00 PM until the time of the service. Online memories and condolences may be shared by visiting www.wichmannfargo.com.