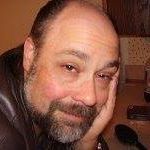 Tim Vorpahl knew he had a bad “ticker” as he called it, and often said he was living on “borrowed time.” On Monday afternoon, September 21, 2015, his Lord decided to bring Tim to heaven at the age of 53. He died suddenly, with no pain, at St. Elizabeth Hospital in Appleton. Tim was born in Appleton on April 16, 1962, son of the late Leonard and Elberta (Bourassa) Vorpahl. He attended St. Paul Lutheran School in Appleton, and was confirmed in 1976. It was from this grade school class of 1976 that Tim made, fostered, and retained many lifelong friendships. In 1980, Tim graduated from Fox Valley Lutheran High School, and while there enjoyed working behind the scenes on various theatrical productions. Tim was naturally handy with tools, and during the time he attended the University of Wisconsin – Fox Valley, his interest in theater staging continued. His talents were eventually discovered by the Walt Disney Company, and he was invited to travel abroad with Disney On Ice, working as the stage manager. Eventually, his heart yearned to be back home, working with his dad at Vorpahl Furniture – so that's exactly what he did. For many years, Tim continued to learn the furniture repair and upholstery trade at his dad's side. Following Leonard's death in 1997, Tim took over the family business, and proudly produced high quality home furnishings. His heart and soul stayed with that mission until his final day. Tim was aware that it was clear to all that he had grown up in the 1970's and 80's. He collected things like Star Trek movies, rock and roll posters, board games from his youth, Packer memorabilia, vinyl record albums, and valuable books. He was especially proud of his collection of vintage furniture.

Tim's sudden passing will leave a void in the hearts of many. They include his beloved daughter: Elisa Vorpahl (Mr. Lynn Johnson) of Sparta, Georgia; a brother: Steven (Angela) Vorpahl of California; and a sister-in-law: Althea Vorpahl of California. There are also many nieces, nephews, other relatives, and countless friends. He was preceded in death by his father Leonard in 1997, his mother Elberta in 2005, his brother Dennis in 2011, and his brother Robert in 2015. Just last month, Tim also had to say farewell to his longtime companion, Tango.

Pastor Judy Deckert will lead a service to honor Tim's life among us at 7:00 PM on Tuesday, September 29. 2015, at the Wichmann Funeral Home, 537 N. Superior Street in Appleton. He will be laid to rest along with his parents and his brother at Highland Memorial Park. Friends are welcome to gather at the funeral home on Tuesday afternoon from 4:00 PM until the time of the service. In lieu of flowers, a memorial fund is being established.

For more information or to share a memory of Tim, please visit www.wichmannfargo.com.

I would like to thank my dad's legion of faithful friends who stuck by him and came to his aid when times got tough. He loved and appreciated each of you more than you can ever imagine. And even today, while fond memories of my dad flood my heart, my gratitude for each of you remains boundless. Thank you all so very much. –Elisa Vorpahl