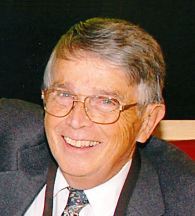 A celebration of life service will be held on Wednesday, June 12, 2013, at First Congregational United Church of Christ, 724 E. South River Street, Appleton. The service will begin at 11:00 AM. Friends may share fellowship and memories from 10:00 AM until 11:00 AM.

Tom was born on November 26th, 1932 to George W. Loveall, Sr. and Mary (Price) Loveall. He married the love of his life, Marie (Orr) Loveall on October 7th, 1956. They spent the first year of their married life in Germany where Tom was stationed during army service. Together they raised three children: Richard, Shari and Dan Loveall.

Tom was a passionate educator. He began teaching in Bloomington, Illinois and was most remembered for his career at McKinley Elementary in Appleton WI. Tom opened the school and served as it's principal for 35 years, retiring in 1996. After retirement Tom continued to volunteer in the school system. Tom also contributed to his community serving as Alderman on the City Council for several years.

Tom would tell you his passion for education and his relationship with his teaching team was only surpassed by the time he spent with his best friend, his loving wife, Marie, traveling, dancing and being with their beloved dogs.

Tom and Shari would like to thank the caregivers of Home Instead for their loving care over the years providing Tom with independent home living.

He was preceded in death by his soul mate Marie Loveall and son Richard.

In lieu of flowers, please consider a donation to either the Fox Valley Humane Society in Appleton WI or the Appleton Education Foundation.