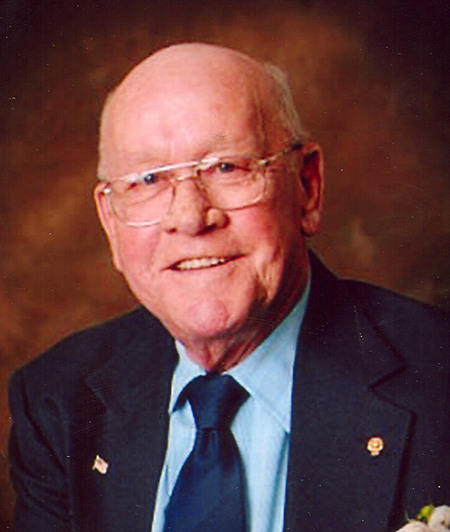 Thomas Joseph McNamara, Jr., age 76, of Kimberly, passed away peacefully on Sunday, February 8, 2009 at home surrounded by his family. He was born January, 24, 1933 in Neenah, the son of Thomas J. and Elizabeth “Bess” (Sweeney) McNamara, Sr. He was united in marriage to his high school sweetheart, Ruth Kachur, on August 2, 1952 and they were each other's “mates” for 56 years.

Thomas served in the U.S. Army in the Korean War. He was employed at Miller Electric Manufacturing Co. for 36 years, retiring in 1992. He was an active life member of Harvey Pierre VFW Post # 2778, as well as a life member of their Military Order of the Cooties. In his spare time he was an avid fisherman and hunter and played golf with Ruth for many years.

He was preceded in death by his parents; his infant brother: Patrick; and brother-in-law: Oscar Peterson.

Funeral services for Tom will be at 11:00 AM on Thursday, February 12, 2009 at Wichmann Funeral Home, followed by an Irish wake and luncheon at VFW Post # 2778. The family will receive friends from 4:00 PM until 7:00 PM on Wednesday at the funeral home. The family has established a memorial fund to support the National Home for Children; Wisconsin Veteran's Home in King, WI, VFW Post 2778's Youth Programs and Military Order of the Cooties.

The family wishes to thank Theda Care at Home Hospice, especially Leslie and Terri, for their kindness and care during Thomas's illness.

May the road rise with you,
May the wind be always at your back,
May the sun shine warm upon your face,
And rains fall soft upon your fields,
And until we meet again, may God keep you in the hollow of His hand.