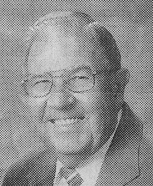 Tom served in the U.S. Army. He was employed by Kimberly Clark ‚Äì Midtec for 40 years before retiring in 1987. Tom was an avid hunter and fisherman. He will be remembered for his woodworking, his garden and making sauerkraut. Most of all, he was a family man, who cherished spending time with family and friends and looked forward to the visits with his grandchildren. The Roberts‚Äô family spent two weeks every summer at Pelican Lake where his last wish was granted by flying over his fishing spot in a sea plane. Tom will be deeply missed by the clan at Kimberly Pharmacy.

The funeral liturgy for Tom will be held at 11:00 am on Saturday, October 7, 2006 at HOLY SPIRIT PARISH ‚Äì KIMBERLY, 600 E. Kimberly Avenue with Fr. Tom Pomeroy officiating. Interment will take place in the parish cemetery. Friends may call at the funeral home on Friday from 5:00 ‚Äì 8:00 pm and at the Church on Saturday from 10:00 am until the time of mass. There will be a parish prayer and scripture service at 8:00 pm on Friday at the funeral home.