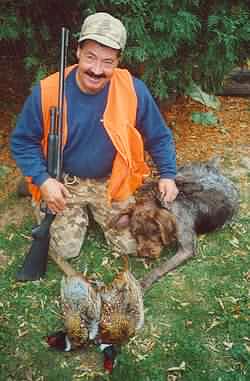 Age 60, passed away unexpectedly in Green Bay on Sunday, July 03, 2005. He was born in Appleton on July 3, 1945, son of James and Marjorie (Butter) Santkuyl. James preceded him in death on August 27, 1985. Thomas was married to Pam Noe from 1979-1981 and later married Ruth Mc Kinnon in September, 1983. Ruth preceded him in death on August 11, 1988. After graduating from Appleton West in 1963, Thomas attended U. W. Oshkosh before joining the United States Air Force in 1966. He proudly served his country as a Security Policeman during the Vietnam War, finighing his tour as a sergeant in 1970. He then finighed his college, graduating as a history and psychology major. He then went to work at Kimberly Clark, retiring early at the age of 56. He enjoyed retirement, spending many hours in his boat, the "Black Jaw." He especially liked to hunt and fish with his longtime companion Rose Heller and many other hunting and fishing buddies. Thomas was a successful hunter and fisherman and in the past wrote articles for the Post Crescent and various sporting magazines. He was competitive in hunting and fishing contests and won many prizes over the years. He will be missed by all, including his German Wire Hair Pointer, Rush, whom he prized.

The memorial service will be at 11:00 a.m. on Friday, July 8, 2005, at Zion Lutheran Church, 912 N. Oneida Street, Appleton, with Rev. Wendy Wirth-Brock officiating. Friends will be received at the church from 9:30 a.m. until the time of the service.

A memorial fund in Thomas‚Äô name will be established and donated to his favorite charities.