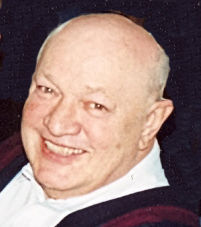 Tom McMorrow, age 81, passed away peacefully at Parkside Care Center in Little Chute on Saturday evening, October 13, 2012. Tom was born in Kaukauna on September 12, 1931, son of the late James and Mary (Hartzheim) McMorrow. He was a graduate of the Kaukauna High School and worked as an optician for Uhleman Optical in Appleton for some twenty years. Later, he worked at Thilmany Pulp and Paper in Kaukauna until his retirement. On April 14, 1955, he married the former Lois Meulemans at St. Nicholas Catholic Church in Freedom; she survives.

Tom was lifelong member of Holy Cross Catholic Church in Kaukauna, and had a deep faith in his faith and in his God. Many will recall Tom as a handy man who could fix just about anything! He was also an avid outdoorsman who loved hunting and fishing – he passed on his vast expertise to his son and to his nephews who will be forever thankful. He lived every day for his family, and showed his love to them by cooking and eventually over-feeding anyone who wandered into his kitchen. And as any good Irishman can do, Tom was a legendary story-teller!

The funeral liturgy for Tom will be held at 12:00 Noon on Wednesday, October 17, 2012 at HOLY CROSS CATHOLIC CHURCH, 309 Desnoyer Street in Kaukauna, with Fr. Thomas Pomeroy officiating. Interment will be in the parish cemetery. Friends may call directly at the church on Wednesday morning from 10:00 AM until the hour of the service.

The family would like to thank the staff at Parkside Care Center for their wonderful care of Tom for the past two years. We will never forget your kindness.

Tom was a one-of-a kind devoted husband, father, grandfather, brother, and uncle. His memory will live forever in our hearts.