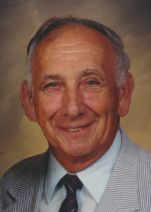 Ted was the first born of ten children on July 22, 1929 in Freedom to the late Charles and Helen (Thieman) Fischer. Ted attended school in Freedom and was taught to work very hard on the home farm. At the age of 20, he purchased his own farm in Freedom.

On October 21, 1950 Ted married Dolores Ann Buettner at St. Therese Catholic Church in Appleton. As Ted and Dolores were walking out of church, Ted's dad, Charlie said “you take good care of her”. Ted proudly took good care of Dolores and his children.

While farming, Ted worked part time construction building homes for Milton Fischer. In 1960, Ted sold the farm and followed his passion for building homes, starting his own business, Ted C. Fischer Construction Co. Ted built residential and commercial properties. Many of the first homes Ted built were near St. Pius Catholic Church in Appleton where he also assisted in building the convent and rectory. As one drives around the Fox Cities area, many people would recognize his homes and say “here is a home that Ted built”! Ted's tools were always within reach and he loved helping the kids with numerous projects. Ted was a very kind, unselfish person who was well respected by his crew and all his subcontractors.

Family was very important to Ted and he enjoyed spending time with all the kids and grandkids at their cottage on Shawano Lake which Ted also built. Snowmobiling was also one their favorite past times with family and friends and oh the stories they could tell!

When Ted semi-retired, he and Dolores spent their winters in Florida where they entertained visitors and played sheepshead and shuffleboard.

Ted's family would like to express sincere gratitude to Aseracare Hospice, especially Tammy, Jamie and Lisa also Home Helpers, especially Judy, Melissa, Heather and Holly for their passionate care for Ted and his wishes to remain at home with family. A special thank you to Father Jim and Father Falk for their support and love throughout the years.

The funeral liturgy for Ted will be held at 2:00 pm on Friday, June 5, 2015 at ST. THOMAS MORE CATHOLIC CHURCH, 1810 N. McDonald Street, Appleton. Fr. Jim Lucas and Fr. Gerald Falk will be officiating. A visitation will be held on Thursday at the Wichmann Funeral Home, 537 N. Superior Street from 5:00 pm until 8:00 pm and again on Friday at church starting at noon until 1:45 pm. Interment will take place at Highland Memorial Park. Online condolences can be offered at www.wichmannfargo.com.

Dad, as you struggled to remember people and various things, you recently asked me how my parents were doing. I told you they were doing well and that God blessed me with the best dad ever and I get to call YOU my dad. You smiled and said that was nice! Love you forever, Sandy.