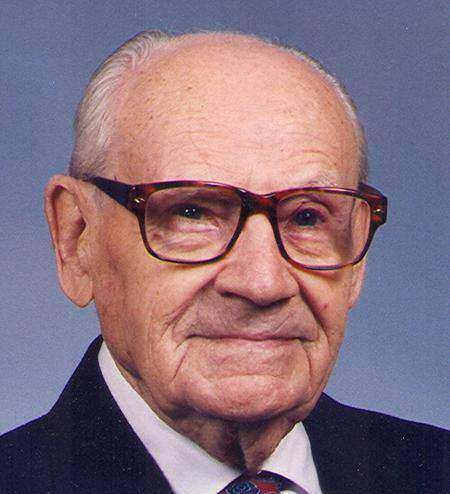 Age 97, was taken by the Lord, Monday morning, March 8, 2004. He was born February26, 1907, to the late Kaarl and Anu (Madison) Melso, in Estonia. After WW II, Ted was employed by the French Consulate in Germany until 1950.Then with his wife and son, he moved to the United States and was employed as a proofreader and translator for Look magazine, until his retirement. Ted was able to read and write in nine different languages. He was a member of Trinity Lutheran Church, Neenah and was a volunteer at the Thompson Center, where he taught German and Russian. Survivors include his daughter-in-law, Marjorie Melso, Neenah; four grandchildren, Christine (Joel) Babinec, Onalaska, WI; John (Carole) Melso, Williamston, MI; Michael (Debra) Melso, Appleton; Reverend Stephen (Jane) Melso, Manitowoc; great grandchildren, Emily, Elisabeth, Erica, Timothy and Samuel Babinec, Eric, Tyler, Kyle and Jacob Melso, Ryan, MiKayla and Aaron Melso, Noah and Grace Melso. He was preceded in death by his wife, Erica, in 1993, his son, Eric C. Melso, in 1988 and 10 brothers and sisters. Memorial services for Theodore will be held at 11:00 am, Friday, March 12, 2004, at TRINITY LUTHERAN CHURCH, 407 Oak Street, Neenah, with Reverend Tony McKenzie officiating. Burial will be in Floral Hill Cemetery, New London. In lieu of flowers a memorial fund is being established for Trinity Lutheran Church.

The family would like to thank the staff of Heartwood Homes for the loving
concern and care they showed Ted.