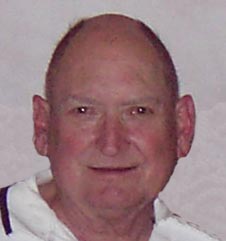 Age 61, passed away at his home on Monday, June 28, 2004 following a lingering illness. Ted was born in Green Bay on April 8, 1943, son of the late Urban and Lillian (Rademacher) Eiting. Ted was a graduate of Kaukauna High School, and on October 26, 1967, he married the former Karen Riehl at St. Francis Church in Hollandtown. He served his country as a member of the United States Air Force and was currently a member of the Urban Klister Post #436 of the American Legion in Wrightstown. For many years, Ted was employed by Lehrer Trucking and then by Keller Structures. Later he worked for Valweld and retired from Milton Propane. Over the years, he tended bar for a variety of area establishments. Ted really enjoyed his retirement ‚Äújob‚Äù, working as the morning greeter at Ghost Town Fitness Center. All will remember Ted for always having a smile on his face and his love for talking to ‚Äúeveryone‚Äù. His biggest smiles were the result of spending time with his three grandchildren. Ted enjoyed NASCAR, and was an avid Matt Kenseth fan. He also enjoyed fishing, bowling, softball, golfing, deer hunting, the companionship of his dog Belle, and spending time with family and friends at his trailer near Shawano. Others will remember Ted for the tool repair business he operated from his home for many years. In addition to the American Legion, he was also a member of the Kaukauna Lions Club. For many years he carried the flag and participated in the annual Schutt in Hollandtown.

The funeral liturgy for Ted will be held at 11:00 AM on Thursday, July 1, 2004 at ST. FRANCIS CATHOLIC CHURCH in Hollandtown with Fr. David Schmidt officiating. Interment will be in Highland Memorial Park. Friends may call at the funeral home on Wednesday from 4 ‚Äì 8 PM and again at the church on Thursday from 10 AM until the hour of the service. There will be a parish prayer and scripture service at the funeral home at 7:00 PM Wednesday evening. In lieu of flowers, the family has established a memorial fund in Ted‚Äôs name.