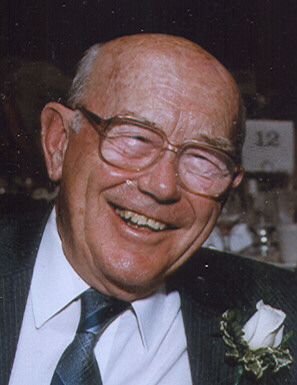 Theodore Francis Maas, age 91, longtime Kimberly resident, passed away, surrounded by his loving family, on Wednesday, December 31, 2008 at St. Paul Home in Kaukauna. Ted was born in Combined Locks Wisconsin in 1917 to Henricus and Maria Maas. His birth came just six years after his parents and their four oldest children arrived from Holland. His father Henricus was one of the original petitioners to have the village of Combined Locks incorporated.

Ted attended Ryan School and Kimberly High School where he was a standout athlete. He graduated from KHS in 1936 holding several school sports records. Ted played semi-pro football for the Flying Dutchmen. He was proud to see his children, grandchildren, and currently his great-grandchildren excel in their athletics.

Ted married Jeanne Courchane in 1943 at Holy Name Catholic Church in Kimberly. They lived in Fort Benning, Georgia during Ted's military service and returned to Kimberly in 1946.

Ted was a mechanic and the owner of the Kimberly D-X Service Station from 1946 until he retired in 1988. He had many loyal customers and credit was extended to all of them based on a handshake and a promise to pay. Ted continued working at the DX for his son Mike for another 10 years to age 80 when his failing eyesight kept him from doing the work that he loved.

Ted loved music. He especially enjoyed Big Band Orchestras, Marching Bands, and the recordings made by his friend Amede VandeVyver. His children inherited his love of musical theatre, having grown up listening to the soundtracks on the big stereo in the living room. Ted also enjoyed long walks. He walked to and from his business multiple times each day as the entire family gathered twice daily for 11:30 lunch and 4:30 supper seven days a week.

Ted was a member of the American Legion having served in the United States Army from 1942-1946 during WWII. He was a lifetime member of Holy Name Catholic Church (Holy Spirit), and the Kimberly Business Association. He was a Charter member of Fox Valley Golf Club and a winner of the President's Cup. Ted bowled on several teams and at age 65 he bowled his personal high league game of 297. He was a Milwaukee Brewer Fan and a diehard Green Bay Packer Fan and season ticket holder since 1956. He and Jeanne have great stories about the Ice Bowl, traveling to away games, and mingling with the players. Ted loved to tell a good joke, and we are convinced that upon reaching heaven he was sure to have told St. Peter one of his favorites.

He is survived by his wife, Jeanne, of 65 years. Seven Children: Pam and Alan Hietpas, Marijo and Tom Bunbury, Mike and Jeanne Maas, Becky and Brett Haskell, Susan Gratke, Annette and Allen Pannier, and Jeff and Bonnie Maas.

Ted is also survived by his sister Cora Chapin of Illinois, and his brother in law Chet Nelson.
Also survived by many nieces, nephews, friends, neighbors, and extended family members.

He was preceded in death by his parents, his brothers and sisters in law: Bill and Emma, Harry and Betty, John and Johanna, his three sisters and two brothers in law: the first Minnie Maas, Minnie Nelson, Marie and Bernard Newhouse, and William Chapin, Great grandson: Alex Terry. His in-laws Tref and Madeline Courchane, Dick and Lois Courchane, and John and Nelda Courchane.

The funeral liturgy will be at 12:00 p.m. on Thursday, January 8, 2009 at HOLY SPIRIT PARISH, Kimberly Campus, 600 E. Kimberly Ave., Kimberly, with Fr. David Beaudry officiating. Friends will be received at the church on Thursday from 10:00 a.m. until 11:45 a.m. Inurnment will be in Appleton Highland Memorial Park.

The Maas family would like to extend a sincere thank you to the Staff at St. Paul Home, Sister Dorothy, Frank Madill, Lawrence Heesakker and Ted's numerous friends who visited him at home and at St. Paul's over the past few years.

In Lieu of flowers, it is Ted's wish to have his family direct memorials to several charities.