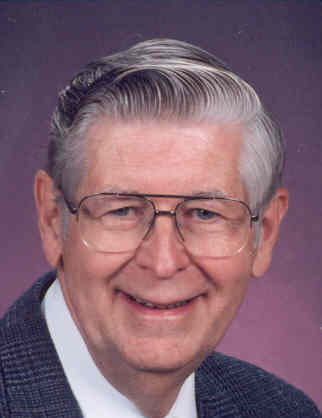 Theodore A. Frank (Ted)
Age 70, died on May 30, 2003 at St. Elizabeth Hospital of congestive heart failure. He was born on May 31, 1932 to Theodore and Marie Frank in Appleton. Ted married Bonnie Tibbetts on June 7, 1958 at Zion Lutheran Church, Appleton. They shared 44 years of marriage together. Ted was an active member of St. Paul Ev. Lutheran Church. He graduated from Appleton High School in 1950 and attended the University of Wisconsin Madison. He served his country in the U.S. Army stationed in Germany for three years. Ted was employed at Wisconsin Electric Power Co. for 36 years, retiring in 1994. He enjoyed traveling, spending winters in Florida, working on his trains, doing volunteer work at church and spending time with family and grandchildren.

He was preceded in death by his parents, Theodore and Marie Frank; parent-in-laws, Cecil and Mabel Tibbetts; one sister-in-law Joyce Tesch-Guenther; one brother-in-law, Runo Tesch.

Funeral Services for Ted will be held on Monday, June 2, 2003 at 11:00 AM at St. Paul Ev. Lutheran Church (302 N. Morrison St.) with Pastor John Baumann officiating. Visitation will be from 9:00 AM until the time of service. Burial will be in Highland Memorial Park Cemetery. Memorials can be directed to the church‚Äôs building fund.
The family would like to extend a thank you to Dr. Rasmussen and the staff at St. Elizabeth Hospital for their care and concern for Ted during his illness.