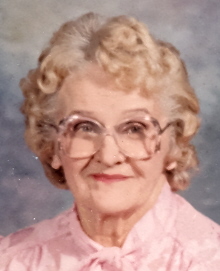 Sylvia A. (Sergo) Keberlein, age 88, passed away Friday morning, November 18, 2011 at Kindred Hearts with family at her side following a lengthy illness. She was born December 3, 1922 in Lohrville, Wisconsin, the daughter of the late Mike and Sylvia (Kucan) Sergo. Sylvia married Elmer Keberlein on March 28, 1942 at St. Mary Catholic Church, Menasha. She was a member and past president of the VFW Ladies Auxiliary. Sylvia liked to travel, and volunteered at St. Mary's Church and St. Vincent DePaul. She loved making popcorn and peanut brittle to give to family and friends, enjoyed sewing and crochet, and loved spending time with her children, grandchildren and great-grandchildren.

The funeral liturgy for Sylvia will be held at 11:00 AM on Monday, November 21, 2011 at ST. KATHARINE DREXEL PARISH, St. Mary‚Äôs Church, 119 W. 7th Street in Kaukauna. Fr. Jerry Pastors will officiate. Interment will follow in the parish cemetery. Friends may call at the church on Monday morning from 9:30 AM until the hour of the service.