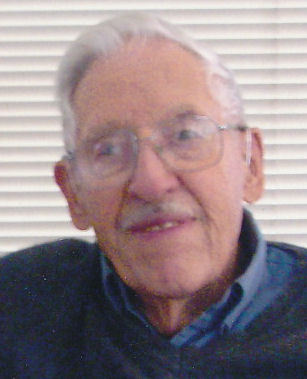 Sylvester Leo Bayer, 93, passed away at Brewster Village, Sunday, May 24, 2015. Syl was born in Appleton to Oscar and Laura (Watson) Bayer on August 18, 1921. He graduated from St. Joseph School and Appleton High School (now Appleton West). Syl proudly served his country in the Philippines in WW II as a member of the 149th Infantry discharged November 7, 1945. In June of 2014 he was accompanied by his daughter Kathy on the Honor Glory Flight to Washington, DC.

Upon return from the service Syl attended the Layton School of Art in the Old Third Ward in Milwaukee. This is where he met the love of his life. On June 10, 1950 Syl and Jeanne (Lyneis) Bayer started 62 years together until her passing in April, 2012. Syl worked his entire career for Tuttle Press as a commercial artist.

Syl enjoyed golf and bowling and excelled at both. He was three time city champion and Wisconsin State Open runner-up. He found himself often competing against his youngest brother Chuck. In The early years it was common to see Syl, his two brothers, Babe and Chuck along with their father Oscar take on any other foursome on the links around the Valley. His passion for golf turned on his creative side as he designed, built and patented specialty putters. His artwork has been displayed throughout the valley. His incredible sense of humor and timing tied together well with his talent for illustrating and led to his publishing of a humorous paperback of the fictional character “Duffy Divot”. Syl and Jeanne had a large circle of friends and enjoyed every opportunity to socialize, hosting dinner parties and bridge club.

Syl was preceded in death by his wife Jeanne, his brother Gerald “Babe” Bayer, his sister Delores (Bayer) Mutschler, grandchildren, Benjamin and Rachel.

Syl became very close to the staff and support members of Brewster Village, whom every day demonstrate how the world would be a better place learning from their compassion. Our heartfelt thanks and gratitude to all of them! Our thanks also to Affinity Hospice and the service they provide. Syl had an enduring respect for Father Gerald Falk who is a bit of a legend in his own field and a heck of a golfer as well. Father Falks numerous visits to see Syl at Brewster Village was the highlight of his day.

Syl and Jeanne were members of St. Pius X Parish, Appleton since 1960.

The funeral liturgy for Sylvester will be held at 11:30 am on Thursday, May 28, 2015 at ST. PIUS X CATHOLIC CHURCH, 500 West Marquette Street in Appleton. Fr. Thomas J. Farrell will be officiating. Interment will take place at St. Joseph Cemetery. A time of visitation will be held on Thursday at the church from 9:30 am until 11:15 am. In lieu of flowers, a memorial fund has been established in his name. Online condolences can be offered at www.wichmannfargo.com.