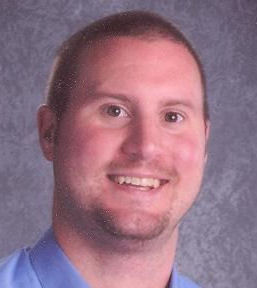 Steve Maufort, age 34, was called to the arms of his Lord early on Christmas Eve morning, December 24, 2011. Steve was born in Shawano on December 19, 1977, son of Russ and Julie (Schabell) Maufort. He grew up in Black Creek and attended elementary school there. Steve was a 1996 graduate of Seymour High School where he played basketball, baseball, and football. During high school, and summers home from college, Steve also played Dairyland Baseball. His football skills took him to the University of Wisconsin – Stevens Point, where he graduated in 2001. His first teaching job was at Sunnyside Elementary School in Pulaski, where he met his future wife, Terri Heinritz. He was completely and immediately in love – the couple married on July 16, 2004. Steve also taught at Pulaski Middle School before moving to Appleton in 2005. At that time, he began teaching fifth grade at Columbus Elementary School in Appleton. He needed to take some time away for medical leave, but returned to teaching second grade at Johnston Elementary School as soon as his health permitted. During his teaching time in Appleton, he also coached basketball at Einstein Middle School, and JV baseball at Appleton East High School. With the exception of the love Steve had for his family and friends, sports pretty much was his life. He loved to play baseball and softball, was a NASCAR fan, faithfully followed the Denver Broncos and Boston Red Sox, and going to the races in Shawano with his dad. He also had a soft spot for his mom's cooking, especially her cookies. Steve was a longtime and dedicated member of Prince of Peace Lutheran Church in Appleton.

He is survived by his wife: Terri Maufort of Appleton, and was proud to be the father of Tucker, who will miss his dad. He is also survived by his parents: Russ and Julie Maufort of Appleton; a brother: Justin Maufort of Appleton and his fiancée Nikki Danner; Terri's parents: Dan and Jill Heinritz of Appleton; a sister-in-law: Jennifer (Tom) Lee of Elkhorn; a brother-in-law: Mike (Kate) Heinritz of Atlanta, Georgia; five dear nieces: Gloria and Sabrina Lee, and Carolina, Emelia, and Lila Heinritz; his paternal grandparents: Leonard and Elizabeth Maufort of Black Creek; maternal grandmother: Janet Maleport of Green Bay; maternal great-grandmother: Catherine Fenlon of Green Bay; Terri's grandparents: Ray and Jean Heinritz of Gresham; Terri's grandmother: Virginia Davis of Shawano; his Godparents: Mary Maufort and Steve Werner; as well as his aunts, uncles, cousins, friends and teaching colleagues. Steve was preceded in death by his maternal grandfather: Clarence Schabell; and maternal great-grandparents: Ruthann and Raymond Kroll, Kenneth Fenlon, and Clarence Schabell; and by Terri's grandparents: Ken and Gloria Davis;

The Christian Funeral for Steve will be held at 11:00 AM on Wednesday, December 28, 2011 at PRINCE OF PEACE LUTHERAN CHURCH, 2330 E. Calumet Street in Appleton, with Rev. Gary Nokleberg and Rev. Roger McQuistion officiating. Friends may call at the church on Tuesday from 4:00 PM until 7:00 PM, and again Wednesday morning at the church from 9:00 AM until 10:45 AM. A memorial fund is being established for the Fox Valley Brain Tumor Coalition.

Steve was a devoted and loving son, grandson, husband, father, brother, and friend. He made friends easily, and his love for life spread quickly to those around him. Those that knew Steve will all say they were better for having had the blessing of being among his friends. He will be missed by all who knew and loved him.

The family would like to thank the countless caregivers who graciously took Steve and his family into their arms during his illness. They include Dr. Thomas Wascher, David Bond, and their staff; The NeuroSpine Center; Dr. Editha Krueger and the staff at Radiation Oncology at Appleton Medical Center; The Siekman Cancer Center; Dr. Kevin Mortara and the staff at Fox Valley Hematology and Oncology; the Fox Valley Brain Tumor Coalition; the administration, staff, and students of the Appleton Area School District; everyone at Cherry Meadows Hospice; Pastor Roger and Pastor Gary from Prince of Peace; and the many friends, family members, and loved ones who helped in so many ways. Your kindness will never be forgotten.

Steve – We want to thank you too. Thank you for being strong and courageous; for fighting so hard. We know that you didn't want to leave us so soon, and we are so proud of the way you handled your illness. Being always the teacher, you have taught us some valuable things we could never have learned in a classroom. We will love you and miss you always, but your legacy will live on in the family you have left behind and in the life lessons you have taught us all.