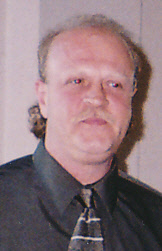 Steve “Mort” Mortimer, age 59, passed away on Friday, June 1, 2012 at St. Elizabeth's Hospital in Appleton. He was born on February 25, 1953 the son of Kenneth and Marjorie (Miller) Mortimer. He grew up in Brillion and before entering high school the family moved to Appleton. In 1971 he graduated from Appleton East. He was united in marriage to Lorie Kettleson on October 28, 1989 at St. Bernard Catholic Church in Appleton. Steve worked for Presto Products for over 20 years and later began a home décor business with Lorie. Steve enjoyed hunting and fishing, but his favorite sport was sturgeon spearing. He was an energetic Packer fan and longtime ticket holder; he enjoyed letting people know that he hadn't missed a game in over 25 years.
Steve is survived by his wife, Lorie of 22 years, twin daughters, Sara (Sean Szablewski) and Emilee; one brother, Thomas Mortimer and his children: Lora (Jon) Glasel and their daughter Zoe, Tara (Clint) Peloquin; father-in-law, William Kettleson; further survived by numerous special friends. He was preceded in death by his parents, one sister Susan Mortimer, and mother-in-law Letha Kettleson and dear friend Tom Dietzen.
Memorial service will be held at 6:00 PM, Wednesday, June 6, 2012 at Wichmann Funeral Home Tri-County Chapel, with Chaplain Jordan Kuczwara officiating. Friends may call at the funeral home from 3:00 PM until the time of service. In Lieu of flowers a memorial is being established.
Steve will be missed by his sturgeon spearing group. A Special thanks to Mark and Nancy Winkler, Terry and Georgia Riggles, and Dan and Sandy Witthuhn for giving time, a helping hand, and support for making life easier for Steve and his family.