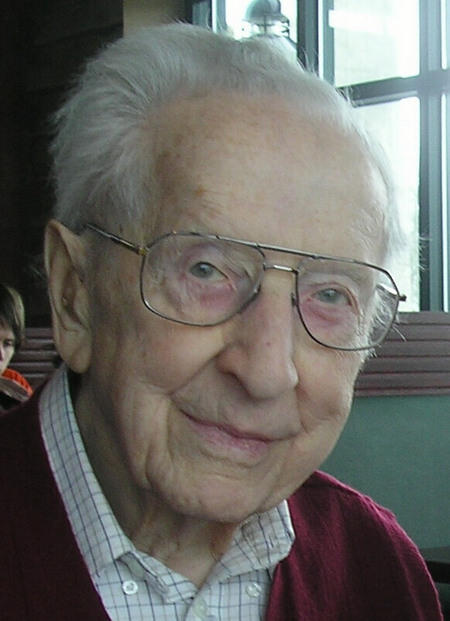 Stanley R. Gabert, age 94, passed away Monday, February 1, 2010 at Appleton Medical Center. He was born on July 12, 1915 in Sturgeon Bay; son of the late August and Lillian Gabert. On December 13, 1944, he was united in marriage to Marian Quirt. Stanley served his country with the U.S. Navy during WWII. He sailed aboard the U.S.S. Bunker Hill and was awarded the Silver Star for his heroic actions after the ship was hit during a kamikaze attack. He received his undergraduate degree in Political Science from UW-Madison and then received his law degree from UW-Madison as well. Stan first joined the law firm of Bradford and Derber which became Gabert, Williams and Farb. He was a member of the Wisconsin State Bar Assoc., Optimist Club and the Elks. Stan served as a U.S. Court Commissioner and was also a deacon at First Congregational U.C.C., trustee of Riverside Cemetery and a member of the Riverview Country Club. Loving father and grandfather, Stan enjoyed the outdoors with a love of fishing, hunting and walks in the woods, but most of all, he cherished spending time with his family. Born and raised on a farm in Door County, he is the last remaining of 11 children. Stan is survived by his children, Bruce (Kristine) Gabert, McFarland, WI, Helen (Charles Lewis) Gabert, Chapel Hill, N.C., Jane (Mark) Spietz, Oshkosh and David Gabert, Appleton; grandchildren, Erin Gabert, Asheville, N.C., Peter Lewis, Chapel Hill, N.C., Lindsey and Alicia Spietz, Oshkosh and Cenya Castillo, Fremont. Stan is also survived by many nieces, nephews, cousins and friends. He was preceded in death by his parents, his wife, Marian Gabert, daughter, Mary Elizabeth Gabert, his special friend, Edna Norstrom, his 10 brothers and sisters and by his three generations of black labs, all named “Smokey”. Funeral services for Stan will be held on Friday, February 5, 2010 at 11:00 a.m. at FIRST CONGREGATIONAL UNITED CHURCH OF CHRIST, 724 E. South River St. with the Rev. Jane B. Anderson officiating. Family and friends may visit on Friday at the church from 10:00 a.m. until the time of the service. Interment will take place in Riverside Cemetery, Appleton. In lieu of flowers, a memorial fund is being established to benefit the Door County Land Trust, P.O. Box 65, Sturgeon Bay, WI 54235, (920)746-1359, www.doorcountylandtrust.org.