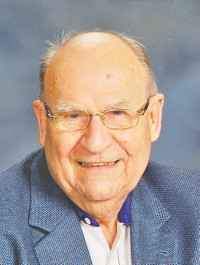 Stanley Joseph Penkala, age 82, died peacefully surrounded by his family at home in Appleton on May 19, 2013. Stanley was born in Chicago on October 10, 1930, son of the late Edward and Stephanie (Mazur) Penkala. Stanley was a graduate of St. Mary High School in Menasha and on August 2, 1958 married the former Carol Jean Stevens in Manawa. She preceded him in death in 2000.

Stanley is survived by three children: Robert (Stacy) Penkala of Berkley, Michigan; Stephen (Ann) Penkala of Neenah; and Joan (Timothy) Matey of Appleton and his seven devoted grandchildren: Charles, Lauren, Ross, Melissa, Lindsay, Drew and Alexander. He is also survived by a brother: Richard (Dorothy) Penkala of Appleton; a brother-in-law: Lee (Betty) Stevens of Green Bay; and a sister-in-law: Lynne Toseff of Madison. Stanley was preceded in death by a brother and sister-in-law: Edward (Pinky) and Magdalene (Toots) Penkala.

For nearly forty years, Stanley was employed as a lithographer for Banta Corporation. Passionate about his work, he was honored at a retirement party that included many colleagues, friends and family members. In retirement, he worked as a Courier for Enterprise Rent-A-Car.

He was a proud member of the United States Marine Corps, which will provide full military honors following his funeral mass. Stanley was an active member of St. Mary Catholic Church. He was a devoted Chicago Cub fan, loved to travel and cherished time with family and friends. Additionally, Stanley enjoyed golfing and bowling.

Funeral mass will be celebrated at St. Mary Catholic Church, Appleton at 11:00 AM on Friday, May 24, 2013, with Fr. Jim Leary, OFM Cap. officiating. The family will receive friends two hours prior to the service at the church. A private burial for immediate family will be held at St. Mary Cemetery. In lieu of flowers, contributions in Stanley's memory may be made to the Martha Siekman Cancer Center. Online condolences may be offered at www.wichmannfargo.com.