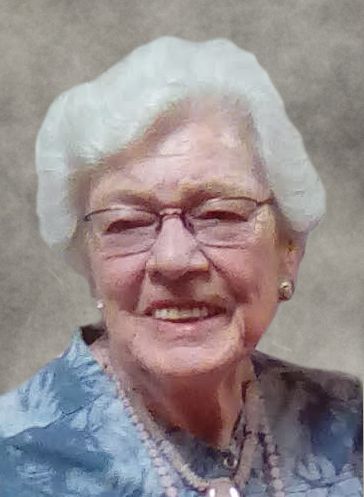 Shirley A. Griesbach, age 89, of Menasha, passed away peacefully surrounded by family at her home on Saturday, November 11, 2017, from complications of a massive stroke. She was born in Durham, North Carolina on September 22, 1928. She graduated as a registered nurse from Mercy School of Nursing, Charlotte, North Carolina in 1949.
In 1950 she responded to a National Red Cross request for volunteers to nurse victims of an Iowa polio epidemic. There she met an engineering student, who became her husband, Bud.
They married in Chicago in June of 1951. A week after their wedding they moved Galveston, Texas; the first of many moves (Texas, Virginia, Iowa, Wisconsin, California, Connecticut and back to Wisconsin). In each move Shirley left a void to be filled. She was active in the community: PTA President, Girl Scout Leader, Red Cross Blood Drives, school and private duty nurse. She could talk to anyone, was fond of lunching out and sharing a cup of tea with friends. She played bridge as a way to meet people, many of whom enjoyed her seasonal home decorations.
She is survived by her devoted husband of 67 years, Henry “Bud” Griesbach; her children, Sandy (Jim Whiteside), Henry, David (Deborah) and Janet (John Woodson); her grandchildren, Sara Griesbach (David Halprin), Hannah Griesbach, Ben Griesbach, Maya Ghose, Gustavo Griesbach and Cooper Whiteside; and great grandchild, Ellington Rose.
A service celebrating Shirley’s life will be held on Saturday, December 2, 2017 at 12:00 p.m. at WICHMANN FUNERAL HOME, 537 N. Superior Street in Appleton. Family will receive guests on Saturday starting at 10:00 a.m. until the time of the service. In lieu of flowers, a memorial fund has been established in Shirley’s name to support: Planned Parenthood, Bergstrom-Mahler Museum of Glass, and the Red Cross. Online condolences can be shared at www.wichmanfargo.com.