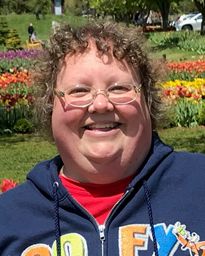 Sherry L. Loderbauer, age 47, passed away peacefully on July 20, 2021 at her home surrounded by those she loved.  She was born on August 18, 1973 at Kaukauna Community Hospital in Kaukauna, WI, the daughter of Joseph and Donna (Propson) Loderbauer.

Sherry was very strong-willed and independent, which truly assisted in her tenacious battle with cancer these past six years.  Having been raised on a farm, she had a great work ethic and began babysitting at the age of 13.  She went on to work at Copps Food Center in Appleton when she was 15 until the age of 34.  In addition, she obtained her legal secretary degree from Fox Valley Technical College and began her career with Attorney Dan Hoff in 1993.  She continued to work full-time as able, until progression of her disease.  Dan Hoff was an exceptional boss and close family friend to her and her family for over 29 years.  Sherry volunteered as a bingo caller for her parish, St. Katharine Drexel in Kaukauna, WI and later for Holy Spirit in Darboy, WI.  Sherry was a hunter’s safety instructor for three years with the Twin City Rod & Gun Club in Appleton, WI until her initial diagnosis.  She enjoyed working with the kids in teaching both gun and bow safety.  Sherry’s house was always decorated for the holidays, but she had a special love for Christmas.  Anyone who was privileged enough to see her indoor holiday display of up to 65 decorated Christmas trees of all sizes, was in for a treat.  Each tree had its own theme and was carefully adorned differently each year.  Sherry loved baking, tending her flower garden, walking with her neighbor, Mary, taking pictures, enjoying nature, deer hunting with her dad and brothers, as well as traveling with many friends and family, but especially the many fond trips she took with her sister, Shirley.  Most of all, she enjoyed spending quality time with her family, which was extremely important to her.  She had a special bond with her dad, Joseph, as well as her goddaughter, Maria, and her two children, Abby and Will (the little shitters!).  They truly meant the world to her.  Sherry dedicated her life to helping others and was always there to cheer people up and give them courage and strength in their difficult times.

The funeral liturgy will be held on Monday, July 26, 2021, at ST. KATHARINE DREXEL PARISH, ST. MARY’S CHURCH, 119 West 7th Street, Kaukauna, WI with Fr. Donald Everts and Deacon Mark Ebben officiating.  Interment will be in the parish cemetery.  Visitation will be at the Fargo Funeral Home, 400 W. Wisconsin Avenue, Kaukauna, WI on Sunday, July 25,  2021 from 3:00 PM until the time of a prayer service at 7:00 PM, and again at the church on Monday from 9:00 AM until the time of service at 11:00 AM.

Sherry would like to thank Dr. Edgard Badine and Dr. Shannon Schmidt from ThedaCare Cancer Center,  Dr. Peter Johnson from Aurora BayCare, as well as Lorraine and the entire ThedaCare Hospice Staff for all of their care and compassion the past six years.  She would like to thank her boss, Dan Hoff, and his wife, Tami, for everything they did for her throughout the years.  Your friendship was amazing!  She would also like to thank the many friends, family, neighbors and co-workers who took her to her treatments and appointments, assisted her with laundry and yard work, made meals and those who stayed with her at the end to ensure she could stay in her home.  Your kindness and friendship will never be forgotten.

A memorial in Sherry’s name is being established.