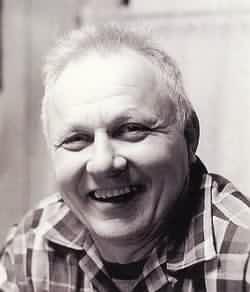 Age 83. The Lord chose to take our father, grandfather, great grandfather and friend to his side in Heaven. He passed away at his son's home in Appleton. Sherm was born on September 30, 1919, in Manistique, MI, son of the late Sherman and Alma (Brietzschneider) Dewey, Sr. He married Romayne Monette on September 1, 1942, in Manistique. Sherm was a custodian for the Manistique Junior High School and a millwright by trade for Inland Lime and Stone and Manistique Pulp and Paper. He served his country in W.W.II for four and a half years, two of which were over seas. He was honorably discharged and received an American Defense Service Ribbon, a European African Middle Eastern Theater Ribbon with one Silver Battle Star, four Overseas Service Bars, a Good Conduct Medal, a Purple Heart and the Combat Infantry Man's Badge. He devoted his spare time to helping develop the Manistique Federal Credit Union where he had been an officer on the board for 33 years. Sherm was well known for his love of hunting and fishing whose uncanny skills in the art of making decoys placed him forever in history as a ''Living Legend'' in the book,''The Fishing Decoy, Volume III,'' by Kimball.

Sherm was preceded in death by his brothers Archie, LaVerne, William, Walter and George, and by a half sister, Flossie.

The family would like to extend a very special thank you to Affinity Hospice and Ann Dewey for their exemplary medical care he received over the past few weeks.

''As I recall the times and memories so sweet, I notice I feel extremely complete. You loved me and treated me with such loving care, that I find my self remembering the times you were there. Whether I was fishing in the live box or picking your hollyhocks, eating your berries or simply chasing fairies, you were always amused and there to kiss me when I was bruised. As a child I would pick your flowers so fine, and you never were cross any of those times. The lessons and the stories were always so grand, I promise to tell them to my children and never let them end. Chicken Little will always live on forever, even though the fox got her because he was so clever. Grandpa, to me you mean the moon and the sky, and I know for sure this is not a good bye. You watched over me while you were here, and I know that you will watch over me from way up there.''